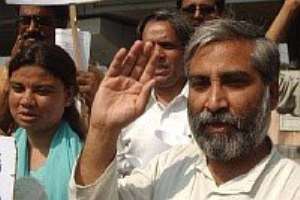 Jajupur is a village in Sandila Tehsil, P.S. Atrauli, of Hardoi District of UP. 107 dalit landless families were allotted land pattas in 1976 by the Gram Sabha but till today the dalits have not been able to cultivate their fields. The reason is that a politically influential feudal family of the neighbouring village Majhgaon doesn't give up its control on these lands which it exercises directly or indirectly. Ramchandra Singh's brother Sri Ram Singh has been the Block Pramukh of Bharawan. They have a third brother Ramendra Singh. Cousin Nagendra Singh's, who is an advocate too, wife is the Gram Pradhan of Jajupur even though they live in Majhgaon.

As soon as these land plots were allotted to the dalits the landlords planted trees on these pieces of lands so that they could lay a claim on them. They always give the excuse of these trees to assert their control over these lands. For some dalit families their ancestors might have taken some loan from the ancestors of landlords. The unpaid loans, fictitious or real, become an excuse for the landlords to continue holding on to their land.

Whenever a complaint is registered with the authorities, the revenue department officials begin the measurement of land plots afresh. The land is marked and handed over to the dalits every time. But either they are unable to sow or if they display the courage to sow they cannot harvest. The control of land goes back to the landlords. Under political pressure the revenue department officials lack the will to recommend registration of case under the ZALR Act against the encroachers or the police lacks the will to prevent landlords from encroaching after the lands have been handed over to the dalits following a due process.

Recently a dalit youth Rajesh cut two neem trees standing on his land to take care of the expenses required to treat his ailing 3 years old son. A case was registered against four dalits including Rajesh for illegal felling of green trees. Ramchandra Singh, Ramendra Singh and Sukhdeo Singh took away the driver and the helper on the tractor trolley which had come to take away the cut trees. Both these were also dalits. They were beaten at the house of Ramchandra Singh and then handed over to police. Policeman incharge of investigation in the case M.P. Singh created ruckus in the house of Rajesh when he couldn't find him to arrest. He broke a cot and portion of the thatched roof. When it was enquired from the SDM whether felling trees was such a serious crime that the police would exercise undue pressure on the family of the accused the SDM responded that the police doesn't register a case sometimes even on his complaint when whole orchards are cut. Finally Rajesh got relief only after he got bail from the court. But in the meanwhile his child had expired because of neglect of his situation.

A complaint was filed against Ramchandra Singh, Ramendra Singh and Sukhdeo Singh demanding registration of FIR under the Prevention of atrocities against S.C./S.T. Act and the ZALR Act. However, the landlord family is so powerful that it got action against its members stalled. It is amazing how the politically influential family escapes retribution even after violating serious laws and prompt and decisive action is taken by police against the dalits for felling trees on their own land. And all this is when there is supposed to be a dalit sympathetic government in power in UP and the DGP has issued clear cut instructions that FIR has to be registered against any encroacher on a land belonging to dalit allotted by the Gram Sabha.

About a couple of years back the revenue department had slapped a fine of more than Rs. 14 lakhs on Ramchandra Singh, Chandra Prakash Singh, Nageshwar Singh and others for encroaching upon land allotted to dalits by the Gram Sabha. Two people paid the fine but eleven others were able to obtain a stay order from the court.

Having lost all hope from the system the dalits have now decided that they'll let the landlords cut all the trees which they claim were planted by them, even though technically the trees belong to the dalits as it is a Gram Sabha land and anybody else cannot lay a claim on it, and in return the landlords would allow them to till the land. The dalits don't care that they are losing the trees so long as they finally get to become the owners of the land. The powerful landlords, interestingly want a guarantee from the dalits as well as the administration that no case will be registered against them for felling green trees, which is actually illegal.

All revenue department officials feel this is a good compromise practical solution. The dalits also feel that this is probably the best deal they'll get because chances of them getting the land with the trees are remote given the prevailing circumstances. They are desperate to see after 35 long years the day when they can call the land which belongs to them their own. But this is a travesty of justice. This is a victory of brute muscle and money power and failure of Indian Constitution as well as Law and Order machinery. The police-administration have surrendered to the feudal elements and interests of dalits are not safe even in a dalit sympathetic government. The country may be independent for the past 62 years but these dalit families of Jajupur would not yet testify that they have had a chance to enjoy the fruits of freedom.

[Dr Sandeep Pandey is a Ramon Magsaysay Awardee (2002) for emergent leadership, member of National Presidium, People's Politics Front (PPF), heads the National Alliance of People's Movements (NAPM) and did his PhD from University of California, Berkeley, USA. He taught at Indian Institute of Technology (IIT) Kanpur before devoting his life to strengthening people's movements in early 1990s. He can be contacted at: [email protected]. Website: www.citizen-news.org]

“I'm completely aware that you're suffering severe economic ...
7 minutes ago