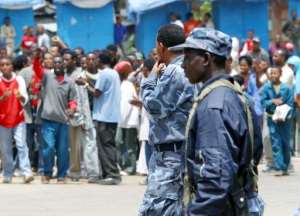 Addis Ababa (AFP) - An Ethiopian court has jailed three British men for between four and six years for allegedly plotting to "establish an Islamic state in Ethiopia", a report said.

Mohamad Sharif and Mohamad Ahmed, who had both been reportedly living in London, were both sentenced to six years and eight months in jail on Wednesday, after the court found them guilty of receiving military training in neighbouring Kenya.

They were accused of planning attacks alongside the Oromo Liberation Front (OLF), a separatist movement opposed to the Ethiopian government.

Mohamad Ali Adros, who was reportedly originally from Somalia's northern breakaway Somaliland region, was sentenced to four years and 6 months, accused of links with Islamist groups in Yemen as well as the OLF, Ethiopia's Fana radio station reported.

"The suspects were apprehended when they tried to execute their terrorist plans after travelling to Ethiopia," Fana reported.

Britain's Foreign Office has confirmed "the detention of a British national" in Ethiopia, and diplomatic sources confirmed local media reports to AFP that all three were British.

The sentences are relatively mild for terrorism offences in Ethiopia, which has tough anti-terrorism laws.

The Oromo are the largest ethnic group in Ethiopia. Amnesty International accused the Ethiopian government of launching a "ruthless" campaign in October 2014 against Oromos owing to a perceived opposition to the government.