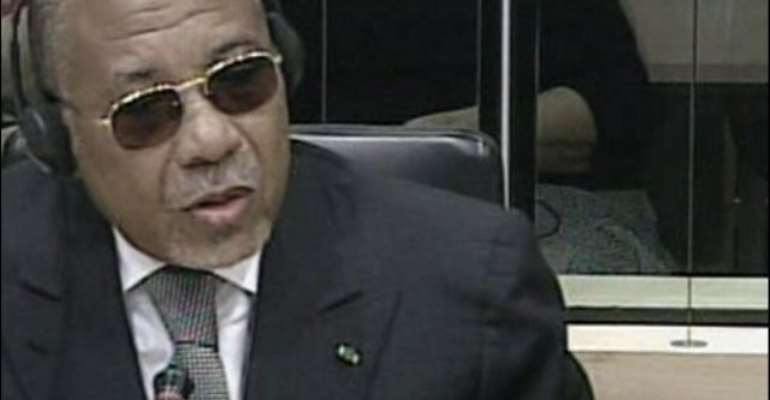 Ex-Liberian President Charles Taylor has dismissed as "lies" the war crimes case against him, as he took the stand for the first time at The Hague.

He denies 11 counts including terrorism, murder, rape and torture, at the Special Court for Sierra Leone.

The 61-year-old is accused of having armed and directed rebel groups from Liberia in order to seize control of Sierra Leone's diamond riches.

Mr Taylor is the first African leader to be tried by an international court.

"It is very, very, very unfortunate that the prosecution, because of disinformation, misinformation, lies, rumours would associate me with such titles or descriptions," Mr Taylor told the court.

'Love for humanity'
He denied claims he was involved in atrocities committed by Revolutionary United Front (RUF) rebels during Sierra Leone's civil war, which ended in 2002.

Taking the stand for the first time in his 18-month trial, he said he had only wanted to bring peace to Sierra Leone.

Mr Taylor, whose testimony is expected to last several weeks, continued: "I am a father of 14 children, grandchildren, with love for humanity, have fought all my life to do what I thought was right in the interests of justice and fair play."

Wearing a dark suit and tinted spectacles, he told his lawyer, Courtenay Griffiths, that the charges were "false" and "malicious".

Mr Taylor denied providing military assistance to the rebels - who were notorious for using machetes to hack the limbs off civilians - or having plotted to invade Sierra Leone with RUF leader Foday Sankoh.

'Diamond-filled coffee jars'
He also denied having been given coffee jars full of blood diamonds by the RUF.

"Never, ever, did I receive whether it is mayonnaise or coffee or whatever jar, never received any diamonds from the RUF. It's a lie, it's a diabolical lie. Never," he said.

Mr Taylor's legal team began setting out its case on Monday. He is the first of 249 witnesses the defence has said it may call to the stand.

His lawyers say Mr Taylor could not have micro-managed a rebel operation in Sierra Leone while also running affairs of state in Liberia.

The prosecution called 91 witnesses, many of whom provided graphic testimony of amputations, murder of children and cannibalism, before wrapping up its case in February.

Mr Taylor started a civil war in Liberia 1989, before being elected president there in 1997. He was himself overthrown by a rebellion and went into exile in 2003.

After a spell in Nigeria, he was eventually extradited from Liberia in 2006.

The trial at the UN-backed Special Court for Sierra Leone was moved to the Netherlands from Sierra Leone's capital, Freetown, amid fears it could create instability in the country and neighbouring Liberia.

A verdict in the case is expected some time next year.