Solving The Flooding Problem In Accra 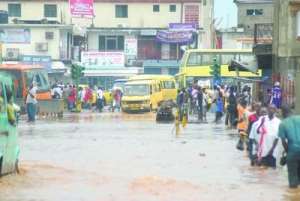 Once again, torrential rains have hit the Accra metropolis, creating heavy floods in various parts that have caused great havoc to lives and property.

The team of Ministers, the Mayor of Accra, officials of the National Disaster Management Organisation (NADMO) and security agencies went round and saw it all.

Also the press have captured and highlighted the ravages and ruins for all of us to see the impact of the floods.

Right now there are scenes of collapsed buildings and fence walls, damaged roads, falling electricity and telephone poles with mangled wires, choked drains, gutters and culverts and ramshackle structure, all staring us in the face.

Homes, and shops are filled with soaked products, materials and personal effects.

And still their owners are busy cleaning, washing and drying items that had been salvaged from the debris.

It is a deplorable and pathetic situation cthat is unbecoming of the status of Accra as the capital city of the country, hence the call for a new capital to be built elsewhere.

In any case, the current flood incident is not the first to occur in the metropolis.

It has been happening over the years.

For example, on June 2-3,2007, Accra was devasted by floods resulting in enormous loss of lives and property. Bits and pieces of the damage still exist.

It therefore means that the flooding in Accra is a perennial problem which is well known and it is expected to happen during the rainy season except that its effect varies with the amount of rainfall.

Usually, in the event of the flood disasters, the authorities go on inspection tour of affected areas to assess the extent of damage and make promises to address the situation.

In the same way, relevant agencies, organisations and institutions hold workshops and seminars whereby the causes of flooding are identified and recommendations made to that effect.

The same thing is happening in the current episode.Clearly, the problem of flooding in Accra cannot be attributed to the natural cause of excessive downpour of rain.

The highest amount recorded by the Ghana Meteorogical Service in the present season is 313.8 millimeters which under normal circumstances cannot cause destructive flooding.

Rather the floods are caused by human activities of indiscipline and negligence as well as lack of adequate and effective drainage structures to take care of the flood waters.

Indiscriminate disposal of refuse has led to the choking of drains, gutters and culverts.

The existing drainage systems are therefore too narrow to contain the flood waters.

Houses are built in waterways blocking the flow of rain water, while bad town planning policies and programmes also contribute to the problem.

Over the years, too, studies have been undertaken to tackle the drainage problem in Accra.

These include the NEDECO Overall Drainage Master Studies covering central Accra (1963), Mott McDonald Studies for the newly developed areas of Accra (1991), SNC Lavalin Preliminary Engineering and Detailed Design Study (1997) and the Carl Bro Design for the construction of a Retention Dyke at Kisseman (1998).

And in 2007, the Ghana Institution of Engineers (GhlE) issued a press statement on the floods that occurred in that year, pointing out the causes and solutions to the problem.

Yes, the reports, studies and recommendations are all there in the archives, drawers and cabinets in the offices.

What is needed is only the effort to put them into action.

In this regard, it is encouraging to note that an inter-ministerial task force has been formed to identify and demolish buildings and illegal structures located in water courses.

From the survey conducted by the committee, about 45 buildings should be pulled down.

But will the demolition exercise be allowed to go on, considering the past experience?

After the flood disaster in August 2007, a number of houses were marked for demolition by NADMO. But the owners sought a court injunction to stop the exercise and that was the end of it.

Besides the task force, an engineering body should be set up to plan and undertake a comprehensive drainage scheme for Accra, expanding the existing drainage structures and constructing additional ones that conform to high quality engineering standards to cope with increasing volume of rain water.

To enhance its performance, it should have the mandate to co-ordinate the activities of agencies involved in the planning, design and execution of construction works in the city such as the road contractors, real estate developers, utility companies and AMA public works department.

After seeing the havoc again and with the past experience and available data, the authorities are expected to appropriate measures to solve the flooding problem in Accra once and for all.

Enough of the lipservice paid to the problem. It is time for ACTION NOW!