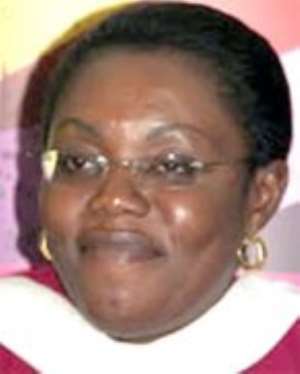 The man who fathered five children with his own daughter, Anthony Roland Sampson Bleworda, has been sentenced to five years' imprisonment for incest.

But the President of the Federation of Women Lawyers (FIDA), Ms Ursla Owusu, says the five-year sentence is too lenient to serve as a deterrent to others.

Reacting to the sentence on various radio programmes later, Ms Owusu suggested that the Domestic Violence and Victims Support Unit (DOVVSU) should appeal against the sentence.

Other legal opinions, however, were that the sentence was within the three to 25 years prescribed by the law of the country for such culprits.

The 28-year-old victim in the case is currently being catered for by a non-governmental organisation, while the two daughters she had with her father are being kept in a shelter in Accra.

The other three children (all males) are deceased. The Accra Circuit Court, presided over by Mr Justice C. A. Wilson, found Bleworda guilty on the incestuous charges preferred against him by the Domestic Violence and Victims Support Unit (DOVVSU) of the Ghana Police Service.

The Daily Graphic in its September 30, 2008 edition published the bizarre story of Bleworda, a self-proclaimed prophet of the 'I am-I am' Nazareth Church, who allegedly fathered five children with his own daughter.

Three of the five children, who were all males, died under mysterious circumstances and were buried secretly after the suspect, Bleworda, 52, had performed some occultic rituals.

The daughter “wife” was hospitalised for treatment and counselling while their two female children were sent to a shelter for rehabilitation.

The facts of the case were that neighbours of Bleworda saw the “couple” naked in their yard with the man running after the woman.

The Public Affairs Officer of DOVVSU, Chief Inspector Irene Oppong, said the couple later dragged their two little daughters into their room and locked themselves inside.

She said some of the onlookers, sensing danger that something could be happening to the family, broke into the room and rescued the two children and their mother to the premises of Christ Miracle Power Mission International at New Ashongman, on suspecting that the woman was mentally disturbed.

According to Chief Inspector Oppong, some of the neighbours later handed over the suspect to the police for investigation.

She said the woman, on September 26, 2008, openly confessed to being the biological daughter of Bleworda.

Chief Inspector Oppong said investigations had revealed that the suspect, an ex-soldier, left Ghana in 1986 for Germany at a time the daughter was only six years old.

According to her, the victim was staying with her aunt at Teshie Camp and joined her father for about a month before he (suspect) returned to Germany again.

Chief Inspector Oppong said the suspect developed interest in his daughter on seeing her and often allegedly laced drinks and food with Indian hemp for her.

She said the suspect would then sexually abuse the victim, something which she said took place for the one-month duration that she stayed with her father.

Upon returning to her aunt, she said, it was detected that the victim was pregnant but she failed to disclose the person responsible for the pregnancy.

Chief Inspector Oppong said the suspect returned from Germany the second time and took custody of the daughter to Brekuso in the Eastern Region.

She explained that on his first return in 2002, the suspect was staying at Taifa Burkina before relocating to Brekuso and finally to Kwabenya.

Chief Inspector Oppong said the victim told investigators that she confessed to her mother about what had been going on between her and her father after reading from the Bible that it was a sin for one to sleep with his or her parents or siblings.