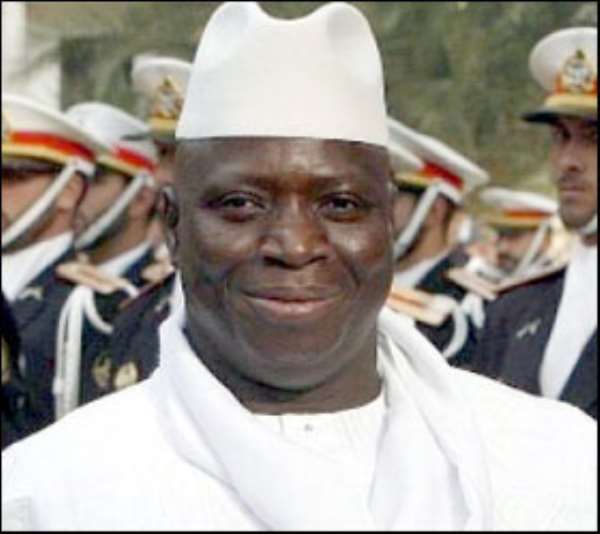 The Gambian strongman stated this yesterday after a memorandum of understanding (MoU) was signed to renew friendly ties following a joint UN/ECOWAS Report that ruled on Gambia's complicity in the deaths and disappearance of Ghanaian nationals in Gambia in 2005.

In response to the statement, President Mills said:  "We are happy to see light at the end. Let's move on from here.... Truth never hides. Like a cork, it will come to the surface when submerged."

President Jammeh said there was an initial allegation that 150 Ghanaians had been killed but the report showed that six Ghanaians and two other nationals were killed.

He said the issue was the greatest accusation he had faced since his assumption of office.

"We have been treated as villains even at the Commonwealth," President Jammeh said, adding that he would not hesitate to admit the killings if Gambia security forces were responsible.

Presidents Mills and Jammeh reaffirmed their condolences to the bereaved families after the signing ceremony in Sirte, Libya.

Under the MoU, the two nations agreed that their governments would co-operate in the exhumation and repatriation of the bodies of the victims to their families in Ghana so that they would be given befitting burials.

The two presidents are attending the 13th Ordinary Session of the African Union and asked the issue to be put to rest for the two countries to forge ahead.

They described the event as unfortunate and expressed thanks to the United Nations and the Economic Community for West African States (ECOWAS) for their roles in establishing the facts of the unfortunate incident.

While expressing his condolences to the families, President Mills called on the two nations to forge ahead together to reach the ultimate goal of improving the lot of their peoples.

"Let's move on, time is not on our side," President Mills said.

President Jammeh, who described Ghana as Gambia's best friend, recalled the friendly relations between the two countries and the mutual assistance each had given the other.

He said the issue had been blown out of proportion for political gains and was emphatic that the killings had not come from Gambian security forces.

While the government of the Gambia suspected ritual killings, Ghanaian leaders staying in both Ghana Town and the Ghana Embassy in Gambia denied knowing the victims, with the explanation that they (victims) had no identification.

“There are about 10,000 Ghanaians making a living in Gambia. I've always been consoled by my clear conscience. We have death penalty in Gambia but we have never implemented it. This issue has hurt me so much,” President Jammeh said.

“We are very grateful that this chapter is closed. We have forgotten all we have gone through," he added.

Report of the UN-ECOWAS Fact Finding Team, commissioned on August 14, 2008 at the request of the governments of the Gambia and Ghana, acknowledged that "the Gambia is not directly or indirectly complicit in the deaths and disappearances of the Ghanaian nationals concerned."

Nevertheless, the Gambian government agreed to make contributions to the families of the six Ghanaians found dead in its territory in conformity with African traditional values shared by both countries.

Both Ghana and Gambia pledged to pursue, through all available means, the arrests and persecution of all those involved in the deaths and disappearances of the Ghanaians and other ECOWAS nationals, especially those identified as culprits in the report.

Both countries agreed to follow up on any other future leads in the case of those suspected missing.

The Report recognised that the dead and the disappeared were victims of a human trafficking scam and because of the regional dimension of the problem, both governments called on ECOWAS member states, with the support of the international community, to intensify efforts to identify and punish known traffickers.

The two governments commended the facilitation of the UN and ECOWAS and the work of the fact-finding team.

They expressed optimism that the findings of the report and the implementation of the decisions of their meeting would help to restore and strengthen the traditional cordial bilateral relations between the two countries.

DAILY GUIDE meanwhile brings to its valued readers the serialized report of Ghana's investigative team into the murder of 44 Ghanaians and other nationals of West African states. Please read on.

FINAL REPORT OF THE GHANA INVESTIGATION TEAM INTO THE MURDER AND DISAPPERARANCE OF ABOUT FORTY-FOUR (44) GHANAIANS IN THE GAMBIA IN JULY 2005.

CHAPTER ONE
BACKGROUND
In July 2005, the Ghana Embassy in Dakar reported that it had received reports indicating that a group of about fifty six (56) persons, including about forty two (42) Ghanaians, ten (10) Nigerians, Senegalese, Congolese, a Guinean, and some Ivorians who had intended to travel to Europe aboard a ship supposedly waiting on the high seas, were apprehended by Gambian security officials when the group landed at the Banjul port in the morning of July 23, 2005.

In the aftermath of the group's arrival in the Gambia and their subsequent encounter with Gambian Security Personnel, some individuals later identified as Ghanaians were found dead through seemingly unnatural causes in Tanji forest near “Ghana Town” in Banjul.

Corpses of some individuals believed to be members of the group were also washed ashore around the Gambian State House, whilst other bodies were discovered near the Gambia-Senegal border town of Kalinjing, and in Foni Village on the banks of River Santambra.

GOVERNMENT
REACTION TO INITIAL REPORTS
On receipt of the initial reports, H.E. President J.A. Kufuor directed a high-powered Government delegation, led by the then Foreign Minister, Hon. Nana Addo Dankwa Akufo-Addo to embark on a fact-finding mission to the Gambia from 7th-9th August 2005.

The delegation met with leaders of the Ghanaian Community in Banjul on the subject of the killings. At the Gambian Foreign Ministry, the Ghana Delegation met with the then Gambian Foreign Minister, Mr. Bala Gaye, in the presence of Mr. Ebou Tall, Permanent Secretary, Gambian Ministry of Foreign Affairs; Mr. Mamburay Njie, Secretary-General at the  Presidency; Mr. B. Njie Deputy Inspector-General of Police; and Mr. Daba Marena, Head of the Gambian delegation.

The Ghana delegation made known the purpose of its visit, and the ensuing discussions were frank and direct. The Gambian Foreign Minister suggested that the eight (8) deceased Ghanaians, whose bodies were found near Ghana Town, may have been victims of ritual murder- an assertion rejected outright by the leader of the Ghana delegation.

The meeting with the Gambian leader was frank and direct. President Jammah categorically denied any Gambian Government involvement and stressed the centuries old relationship between Ghana and Gambia. President Jammeh also denied having any Ghanaian in detention at the time of the delegation's visit.

At the insistence of the Ghana delegation, President Jammeh agreed to a joint Ghana-Gambia investigation and directed the Head of the Gambian National Intelligence Agency to ensure compliance with that directive. He also emphasized the need to identify and punish the culprits behind the gruesome murders.

1(B)       VISIT TO POLICE STATIONS IN BRUFUT AND BUNDUNG

THE Ghana Delegation acting on information received from the Ghanaian Community visited Bundung and Brufut Police Stations were some Ghanaians were alleged to have been detained.

At Bundung Police Station three (3) Ghanaians, Mr.Appiah Kubi, Mr. Fredrick Atta Panyin and Nana Ekow Panyin, who had been incarcerated for ten (10) days without any charge being proffered against them, were released at the instance of Hon. Nana Akufo-Addo, Leader of the Ghana Delegation.

At Brufut Police Station (Ghana Town) two Ghanaians who allegedly escaped their killers and sought refuse in “Ghana Town” could not be traced at that Police Station, though the Commandant of the Station admitted taking custody of the Ghanaians from the Chief Imam of Ghana Town. The commandant in the face of incessant questions admitted that he had interviewed the two Ghanaians, subsequently identified as JOHN AKORFUL and ANTWI.

On further prodding, the Commandant of the Brufut Police indicated that statements taken from the two Ghanaians were in custody of the Head of the Gambian Interpol Unit in Banjul, who at the time of the Delegation's visit was on trek with the Gambian Inspector-General of Police.

The Police Commandant insisted that he had interviewed the two (2) Ghanaians on the day they were brought in, found them innocent and released them. The Ghana Delegation returned to Accra on the 9th of August, 2005, after having tasked the Dakar Mission to identify the victims in the photographs received from the Ghanaians.

By a letter dated 25th August 2005 (Annex 1) addressed to his Gambian counterpart, the Honorable Minister of Foreign Affairs emphasized the need for an expeditious and transparent handling of the matter involving the murder/disappearance of some Ghanaians in the Gambia.

The Foreign Minister's letter provided a summation of information, which the Ghana delegation had received during the August 7th -9th meeting in the Gambia and its immediate aftermath; and urged the Gambian side to co-operate in finding answers to the murder/disappearance of the Ghanaians.

By another letter No.SCR.PA/EM/3 (Annex 2) dated 29th September, 2005, the Foreign Minister again informed his Gambian counterpart of the meeting between President Kuffour and Jammeh on the margins of the 60th Session of the United Nations at which meeting President Jammeh offered to allow Ghanaian investigators join their Gambian counterparts to investigate the circumstances leading to the deaths and disappearance of some Ghanaians in the Gambia. The Minister's letter of 29th September 2005, offered to communicate to the Gambian authorities subsequently, the composition of Ghana's team of investigators.

By yet another letter dated 23rd November 2005 (Annex 3) the Hon. Minister of Foreign Affairs, consistent with the undertaking to provide information to the Gambians on the composition of the Ghanaian Team, informed Hon. LAMINE KABA BAJO, who had replaced MR. BALA GAYE as new Gambian Foreign Minister, on the composition of the Ghanaian Foreign counterparts, of the urgent need to expeditiously unravel the circumstances leading to the murder/disappearance of some Ghanaians in July 2005.

RESPONSE OF THE GAMBIAN AUTHORITIES
First Gambian official response to the alleged murder/disappearance of the Ghanaians was contained in a letter dated 2nd December 2005(Annex 4) from the Gambia Foreign Minister to his Ghanaian counterpart.

The Gambian Foreign Minister LAMIN KABA BAJO stated amongst others the following:

a) A group of West African Nationals attempted to reach Barra which is located on the North Bank of the River Gambia, and “given the suspicious nature of their entry into Gambia and by their presence at Barra”, the group was detained by the Gambian Security Services.

b) According to the Gambians' response, subsequent investigations by the Gambian authorities revealed the group had fallen victim to “unscrupulous human traffickers”. The group, was according to the Foreign Minister “cautioned and released on humanitarian grounds”.

c) Regarding the account given by Martin Kyere, the Ghanaian who escaped on the night of the alleged killings, the Gambian Foreign Minister had dismissed his claims as “a fabrication of his own imagination to divert attention from the predicament he found himself in as a result of his irregular situation”.

e) The Gambian response concluded there had been no foul play on the part of that country's security forces, and urged Ghana and Gambia to pool their resources together to look closer into activities of human traffickers.

Another letter from the Gambian Foreign Minister dated 3rd January 2006 (Annex 5) indicated that the proposed visit of the Ghanaian Investigative Team to the Gambia “had been agreed in principle”  and that the Gambia was open to suggestions as to the convenient date for the arrival of the Ghana Team.

The Gambian correspondence of 3rd January 2006 (Annex 5) introduced another element not previously considered by the two sides.

That new element was the Gambian position that the Ghana investigative effort must now commence in Senegal, because of evidence that the ill-fated journey took off from Senegalese territory with the connivance of Ghanaian front men.

It is against this background that the Ghana Investigation Team proceeded to The Gambia in January to meet with its counterparts, to establish a framework within which the investigations would be jointly carried out.

To be continued
From GNA with additional files