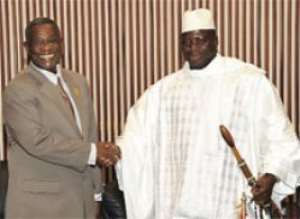 Prez John Evans Atta Mills in a handshake with The Gambia President, Yahya Jammeh. Four years after 44 Ghanaians were murdered in The Gambia, the governments of Ghana and The Gambia have finally resolved to arrest and prosecute the perpetrators of that crime in line with the position of the African Union (AU) and ECOWAS.

In addition, the two countries have also agreed to follow up on any future leads in the case of those suspected missing.

A memorandum of understanding (MoU) to that effect was signed yesterday at a meeting held on the sidelines of the African Union Summit in Sirte, Libya by Ghana’s Foreign Minister, Alhaji Muhammad Mumuni, and the Foreign Minister of The Gambia, Dr Omar Alieu Touray.

It was witnessed by the Chairman of the ECOWAS Council of Ministers, Mr Ojo Maduekwe, who is also the Foreign Minister of Nigeria, and the Deputy Secretary General of the UN, Dr Asha-Rose Migiro.

The resolutions were the result of prolonged diplomacy including a ministerial meeting held to discuss the report of the Joint United Nations-ECOWAS Fact-finding Team, which was set up in August, 2008 to investigate the circumstances surrounding the deaths and disappearances of the Ghanaian nationals in The Gambia in July, 2005.

As part of the settlement, The Gambian government has agreed to make contributions to the families of six Ghanaians who, the government of the Gambia claimed, were the only ones whose bodies were found on its territory.

There was also an agreement between the two countries to exhume and repatriate the six bodies to their families in Ghana so as to enable them to have befitting traditional burials.

Consistent with the findings of the fact-finding team, the two parties, however, acknowledged that the government of The Gambia was not directly or indirectly complicit in the deaths and disappearances of the Ghanaian nationals concerned.

Nonetheless, The Gambian government agreed to make contributions to the families of the six Ghanaians, in conformity with African traditional values shared by both countries.

On July 23, 2005 Ghanaians were hit hard by the unpleasant news of the alleged killing of 44 of their compatriots and nine other West African nationals in The Gambia.

The news generated a national rage against The Gambia, compelling the then government to press the ECOWAS Commission and the UN to conduct an independent investigation into the case, so as to establish the complicity or otherwise of the Gambian security apparatus.

Subsequently, the two institutions set up a joint mission on August 14, 2008, tasked with investigating the issue under the chairmanship of an eminent Jamaican diplomat, Ambassador Ward.

The joint UN-ECOWAS fact-finding team was established at the request of the governments of The Gambia and Ghana to facilitate efforts by both governments to bring about the peaceful resolution of the above-mentioned matter “consistent with the principle of justice, and respect for human rights and human dignity”.

The memorandum said in recognition of the discovery that those Ghanaians and other ECOWAS nationals were victims of a human trafficking scam, and because of the regional dimension of the problem, both governments and other ECOWAS member states should intensify efforts to identify and punish known traffickers with the support of the international community.

Earlier reports on the incident indicated that alongside nationals from other African countries, the deceased, who were described as Ghanaian migrants, were allegedly killed by Gambian soldiers who saw them as hired insurgents brought into the country to topple President Yahaya Jammeh.

In the aftermath of the killings the dead bodies were reportedly found scattered along the Gambian coast.

Meanwhile, the governments of Ghana and The Gambia have re-affirmed their commitment to strengthen their traditional cordial bilateral relations and agreed to go by what was contained in their joint memorandum.