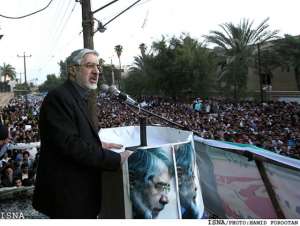 Iran's protest and its future still looks uncertain. The snapshot now is one of civil unrest with the professional security forces largely remaining neutral. There are reports of some security personnel, military and police hesitating to use force on the demonstrators, and cracks in the Iranian government leadership.

The focus of the demonstrators has also shifted onto Supreme Leader Ayahtollah Khameini whose authority has been defied. Whereas no real sign of a power vacuum nigh, it is possible, it is possible to create; it could be imminent.

Mousavi needs to start creating that power vacuum and advancing towards it while redefining the civil unrest into a fully fledged people's revolution. At the heart of the professional security forces is the chain of command, vital to discipline. The military command would need to report to someone, obey someone, an authority. Mousavi needs to start appealing to, and directing the military command to stand down, then help maintain order.

Mousavi could be starring at options,

1. Participate in an election, become president and handover power quickly after one term like Nelson Mandela and retire as the first father of modern day democratic Iran

2. Mousavi can seize power the way Ayahtollah Khomeini did, preside over a free and fair election and hand over power to the democratically elected president likely, reformist Mohamed Khatami then still retire as the founding father of modern day democratic Iran

The second options looks more probable and appealing, yet, all that could mount to naught if Mousavi does not carpe momentum, seize the moment and change the civil unrest face of the situation into a people's revolution.

Violence has entered the fray and it is reality but like a caring but effective General, bloodshed and fatalities on the field is one a leader must come to accept and contend with, it goes with the territory. Leadership is not one for the feeble and Mousavi has already given the signal he was ready to be martyred, ready to die with the people. He has passed that test and could apply some force of his own.

Mousavi must learn from African khaki politicians and former Russian president, Boris Yeltsin. He must first seize a mass electronic medium of communication, a TV station and or a radio station and announced a takeover of the country. Mousavi should order the people to storm these media outlets just as then President Boris Yeltsin's ordered the people to storm the White House (Russian parliament Building) in August 1991 and protect it from the soldiers.

The people did in Russia and won against tanks and armored personnel carriers etc. How could soldiers fire on their own brothers, sisters, sons daughter etc, especially professional soldiers who have honor and have taken a vow to defend the country, the people?


A recorded message from Mousavi on tape stating clearly his intentions to takeover the country and objectives should find a way to a mass media outlet to be broadcasted to the nation.

While attempting to capture an electronic mass media station, he needs to print messages on pamphlets and distribute them to the demonstrators, supporters, the people. The message should include the following:

A call for a general strike in the country. Tell workers except essential services workers like emergency workers and the media to stay at home and join the struggle.

Tell the Bassij and the Revolutionary Guards to lay down arms, be forgiven and join in the fight.

Instruct the people to defend themselves against any attacks and that they have a right to do that, they are winning and are on the good side.

Guarantee the safety of the Ayahtollah Khameini and the Guardian Council but the ask Ayahtollah to step down first peacefully.

Put the deaths and injuries of the innocent demonstrators on the Ayahtolla's head With scores dead, more than a hundred dead unofficially, it would be sadistic and utmost inhumane for a 'man of God to order more violence against the people. It is obvious they cannot stop the pictures from coming out.

Should further deaths occur, this could mount to international crimes against people that could be prosecuted both nationally and internationally.

Mousavi also has to emphasize that sacrifices made by these innocent victims whose deaths and injuries can never be in vain; the train has already moved and cannot be stopped.

Mousavi needs to rely more on the women, it is always a secret weapon. The women of Iran are the constituency or group most oppressed and perhaps the most motivated now fighting for their freedom. They have stood up in partnership with the menfolk. Lady Zahra Rahnavard, Mousavi's wife is a feminine symbol of the struggle with the martyred young lady, Neda who died gruesomely on the streets, blood sputtering from her mouth.

Still Khameini / Ahmadinejan have cards to play. The regime still has control of the security forces and has issued its sternest warning yet threatening to strike with the Revolution Guards. If Mousavi does not act now to claim leadership, there are two other choices opposite the two earlier mentioned;

1. He could wait for concessions from the regime in which he would be tricked to have a power sharing agreement or offered a position then cast aside later.

2. He could play the wait and see game and be brutally eliminated, his supporters equally stamped and see Iran become the most isolated country in the world. And having learned the damages that cell phones and the internet could to a dictatorship, through some "(mis)interpretation" of the holy Koran it could become a Haram (sin) to own them.

Mousavi could then become an accomplice in one of the most brutal crimes against a people if he failed to act now.