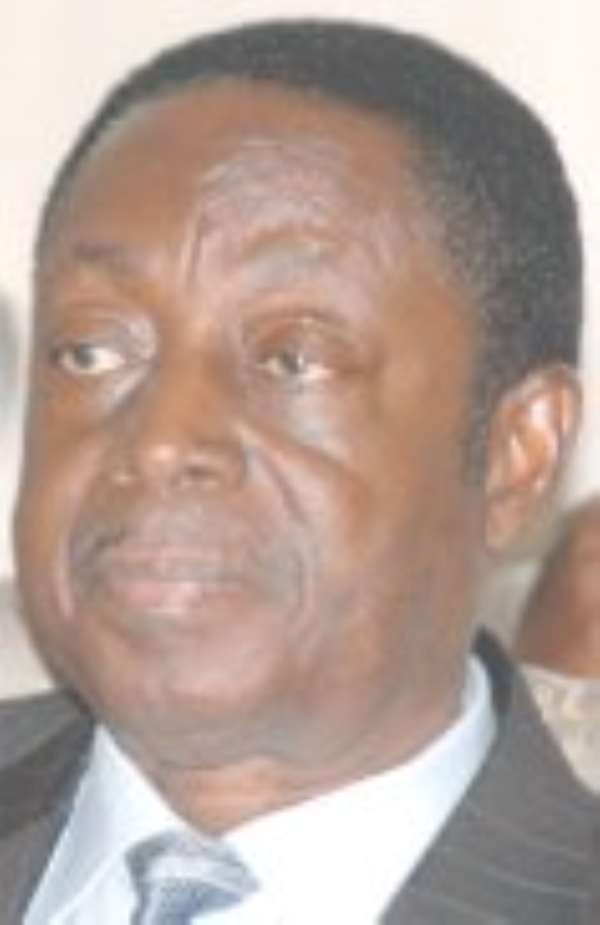 Dr Kwabena Duffuor - Finance Minister STAKEHOLDERS attending the 6th Annual General Meeting (AGM) of the Graphic Communications Group were full of praise for the company’s business strategy, which has made the company one of the best public companies in the country.

Officials from the State Enterprises Commission (SEC) were impressed that the company was the first to submit its audited accounts to the government this year.

“I must say that Graphic Communications Group is one of the best, if not the best SoE in the country,” an official from the Finance Ministry said. “This is the first audited accounts that we have received from SoE’s this year,” another official from the SEC stated, highlighting further that the company has indeed showed that it has the right approach to management and business growth strategies.

Although the government’s financial year ends on December 31 every year, SoEs have not submitted their management reports and financial statements six months after the end of the financial year, due, in part, to the absence of board of directors during the early part of the year.

Graphic Communications Group Ltd (GCGL), the parent company of Graphic Business, presented its audited financial statement and management report to the government at its 6th AGM on June 18, which was also the first AGM by an SoE this year.

The Ministry of Finance and Economic Planning and the State Enterprises Commission (SEC) were unanimous in their praise for the Graphic Group’s sterling performance last year, amidst difficulties that faced the economy and the company.

In fact, representatives from the Finance Ministry and SEC said at the AGM that it was most commendable that, in the last five years, the state-owned media giant had performed above expectation and had paid dividends to the state, making it one of the best SoEs in the country.

“In terms of performance and corporate governance, GCGL is one of the best, if not the best SoE in the country,” the Head of Non-Tax Revenue at the Ministry of Finance, Mr Enoch Cobbinah, said after receiving the audited financial statement and management report from directors of the company at the AGM.

This performance, which exceeded the company’s target for the year by 9.8 per cent, and resulted in a gross profit of GH¢14.28 million, an increase of 15.6 per cent over the previous year’s position of GH¢12.34 million was highly commended by the stakeholders at the meeting.

The company was, however, not spared the ravaging effects of the global economic meltdown, with the high cost of doing business increasing the cost of production by 31 per cent from GH¢8.19 million in 2007 to GH¢10.73 million last year.

“Let me, on behalf of the government, commend the board of directors, the management and staff of the company for their vision, commitment and dedication,” Mr Cobbinah stated, but also challenged the board and management to challenge themselves to achieve higher results in the coming years.

The success story of GCGL is a marked departure from the trend among SoEs whose poor performance, according to the Finance Minister, Dr Kwabena Duffuor, represented a risk to the fiscal consolidation of the economy, as they “incur huge losses and accumulate excessive debts.”

The Managing Director of the company, Mr Ibrahim Mohammed Awal, told representatives of the government that despite the challenges the company faced, it had declared a dividend of GH¢600,000.

The rising prices of oil and newsprint, a major raw material for the company, as well as frequent breakdown of the existing press, contributed largely to the rise in the company’s production cost for the year under review. Management, however, adopted cost- cutting measures to contain the production cost, thus enabling the company to still come through with a dividend payment to the state.

He said advertising revenue and volume exceeded targets by 9.9 per cent and 16.2 per cent respectively, adding that newspaper sales also went beyond target by 5.4 per cent, having shot past its 2007 deliveries by 21.8 per cent.

The company’s subsidiary, G-Pak Ltd, also posted an impressive performance in the year under review following a restructuring exercise that resulted in the laying off of 35 workers, the MD added.

The managing director explained that aggressive sales and marketing drive, which for instance, brought the Graphic Business newspaper into being and increased subscriptions, contributed significantly to the high newspaper sales.

“All our newspapers continued to pay attention to the quality of content, resulting in improved performance in sales and circulation,” Mr Awal stated.

The company is currently embarking on an ambitious project to replace its obsolete press with a modern version, which would enhance the quality of products as well as improve circulation.

Mr Awal told the shareholder that two separate loans, amounting to GH¢10.5 million had been secured for the procurement of the machines which had already been delivered and was expected to be inaugurated early next year, as work on the physical structure had reached an advanced stage.

The managing director of GCGL was upbeat about the year, saying management would pursue prudent corporate policies to increase revenue and profit.

“We are challenged by the ever- increasing competition in the media industry and the global economic crisis to continue to implement appropriate strategies,” such as the continuous improvement of staff capacity and the deployment of modern technology to enhance competitiveness and maintain the company’s leadership position on the country’s media landscape.

The Board Chairman of the Group, Mr Emmanuel Baba Mahama, explained that due to the massive injection of funds into the new press project and a slight dip in the net profit of the company from GH¢2.47 million in 2007 to GH¢2.46 million last year, the company could honour a dividend of GH¢600,000, down from GH¢800,000 declared the previous year.

Mr Mahama said the company also contributed to oiling the government financial machinery with the payment of GH¢1.32 million corporate taxes and GH¢1.45 million in Value Added Tax, in addition to import duties and withholding taxes collected on behalf of the government.

He reiterated the determination of the company to consolidate its position as the leader in the media industry “by maintaining higher quality products,” adding that with the global economic crisis still in sight, GCGL would adopt appropriate internal actions to ensure that the company remained viable.

The acting Executive Chairman of the SEC, Mr Yao Klinogo, also commended the company, and called on the new board to improve upon where their predecessors left off and design appropriate strategic direction for the company.

“The SEC is ready to help in good government practices, and anytime you need our help, do not hesitate to reach us,” Mr Klinogo stated.