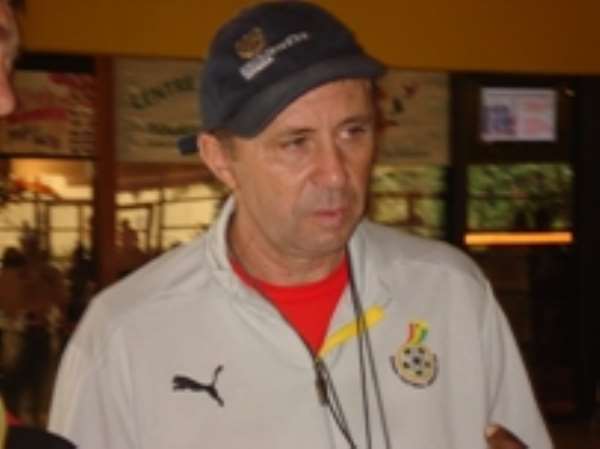 Milo has led in the Stars well Serbian coach Milovan Rajevac has given Ghana its smoothest ever start in the history of the Black Stars in World Cup qualifiers since independence in 1957.

Rajevac, an unknown hand in the world coaching circles when he was appointed in August last year, has whipped the previously hesitant side into a terrific shape.

His appointment was met with fierce criticism because of his scanty knowledge of the English language but the likeable coach has quietly worked on the frailties of the side to reach near perfection.

Near perfection because the Black Stars are yet to concede a goal after three matches in the second phase of these qualifiers – something unknown to the Black Stars.

Ghana, despite being four-time African champions, have struggled in World Cup qualifiers since independence and in all the qualifiers supporters had to contend themselves with the mathematics of hopes which all failed until 2006 when the country qualified for the tournament for the first time.

Even then Black Stars fans were still engaged in the mathematics until the last day in Cape Verde to confirm qualification.

But with the second phase of these qualifiers, the Black Stars are totally unrecognisable from the previous years, playing away comfortably - scoring five goals and conceding none - so much unlike a Ghanaian defence.

Ghanaian defenders especially the Black Stars were used to leaking goals badly and that weakness was nicely obscured by the country impressive midfield play.

But since the Serbian took over he has taken his off days to scour the world – not only Europe as previous coaches did - to discover talents for the national team.

Ghanaian players in the Middle East have benefitted immensely in this move by Rajevac with Opoku Agyemang brought in from Qatar while Egypt-based Papa Arko also gained his place.

To continue the policy of an evolving national team several young players who were neglected in the past have also been given the opportunity.

Kwadwo Asamoah – huge talent neglected by previous coaches has flourished under the Serbian while Moussa Narry, Bernard Kumordzi, Isaac Vorsah and Prince Tagoe have all been encouraged.

While building a team for today that is pivoted around experienced Richard Kingston, John Mensah Micahel Essien, Eric Addo, Stpehen Appiah and Sulley Muntari – the youngsters have been given the priceless opportunity to mingle and learn for their world-class compatriots.

Ghana has also shifted from its traditional 4-4-2 formation to a more European style of play without losing its African qualities like dribbling, swift passing and power.

This is what has brought the discipline in the squad, making the defence stable and less susceptible errors.

Rajevac must be given the credit for his work and if he wins Ghana's next game against Sudan at home in September we can reach the World Cup – there and then.

If something goes wrong the coach is criticised but now Rajevac has shown that he had done all the work that deserve our praise.

While praising the Serbian for putting Ghana in the pole position the coach must continue to build his team as he has started and should not be content with the gains but do more to make the Black Stars even better.