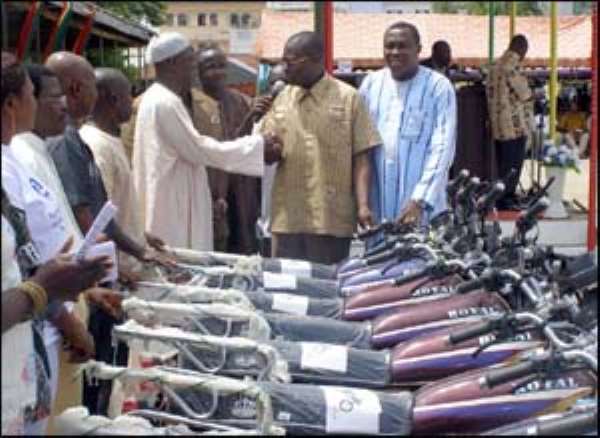 Dr. Yankey doing a presentation THE EASTERN regional minister, Mr. Samuel Ofosu Ampofo, who is the National Organiser of the ruling National Democratic Congress (NDC) party, yesterday caused a political stir at the launch of Nationwide Malaria Control Programme at Koforidua in the Eastern region when he pleaded with Zoomlion Company Limited to wage a relentless war on mosquitoes in the country but spare the 'life' of one big 'mosquito', 'General Mosquito' who is an asset to the party.

Mr. Ofosu Ampofo who was speaking at the official launch of the malaria control programme said mosquitoes are the main cause of malaria in the country and “we shall kill all of them except our party general secretary, Asiedu Nketia, popularly called 'General mosquito'”.

“I will plead with Zoomlion people to spare the life of our general secretary, otherwise they will weaken the administration of our party,” he said, generating intense laughter from his audience.

According to the regional minister, considering the huge sum of money which is pegged over GH¢700 million that the government spends annually on malaria treatment and prevention, it is crucial that everyone, no matter the political leanings, to put their hands on deck to ensure the success of the programme.

Zoomlion which is going to be at the forefront of the fight against mosquitoes nationwide have acquired 500,000 spraying machines, 300 motorbikes and 30 Nissan pick-ups for the exercise.

Regional co-ordinators of the exercise have been put in place while a national mosquito ambassador, one Owoahene Nana Acheampong, a Ghanaian resident in the United Kingdom, who would be spearheading the campaign across the country, was unveiled at the official launch yesterday with an allocated official vehicle.

According to the National Co-ordinator at Zoomlion Ltd, Alhaji Habib Mohammed Ziblim, the company has constituted a technical advisory committee made up of experts and private individuals from various fields connected with the Mosquito Control Programme, as well as reputable institutions to advise on planning, execution and monitoring of all aspects of the programme.

The Minister of Health, Dr. George Sipa-Yankey, who launched the programme, said the spraying exercise will give employment to about 5,000 Ghanaians, adding that the spraying will not be limited to outdoor but indoor areas, including rooms.

He told the gathering that as a result of the importance the NDC government attaches to the elimination of malaria which will consequently lead to improved living conditions, the government will form an anti-malaria brigade soon.

The health minister also indicated that the government will collaborate with the neighbouring countries to ensure effective fight against mosquitoes since they could migrate from those countries.

The Okyenhene, Osagyefuo Amoatia Ofori Panin, who chaired the launch, asked Ghanaians to change their attitudes when it comes to keeping themselves and the environment clean.

“Government should enforce the laws on environmental cleanliness so that diseases that emanate from filth could be minimised,” he said.

He said the huge amount of money spent on treatment of malaria and its prevention could be channeled into other areas like building factories and schools which will eventually help reduce poverty in the country.

“Let's check the activities of illegal miners who to a large extent create breeding grounds for mosquitoes and pollute our river bodies,” he indicated.

The national launch was attended by other ministers including Minister for Agriculture, Mr. Kwesi Ahwoi, a deputy minister for Local Government and Rural Development, Elvis Afriyie-Ankrah, as well as district chief executives in the Eastern region.