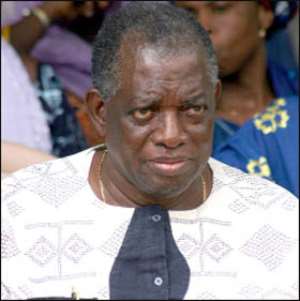 Felix Owusu Adjapong THE INSTITUTE for Democratic Governance, (IDEG) has proposed the establishment of an independent body that will oversee the effectiveness of the country's political transition.

IDEG on Wednesday, May 13, held a public policy dialogue series in Accra, under the theme, “Towards Peaceful Political and Administrative Transition in Ghana”.

Speakers and participants discussed thoroughly, the route to peaceful transition in Ghanaian politics and made various suggestions as to how Ghanaians could get a successful political transition in the country.

According to IDEG, the establishment of an independent body to steer the affairs of political transition would help fill all gaps and loop holes in the country's politics.

Various panelists and participants who pointed out that Ghana's political transition would only become successful when there is a well-established independent body to steer the affairs of party politics in the country.

The chairman for the event, Prof. Samuel K. Adjepong, Chairman of Governing Council NAPRM & Principal, Methodist University College, pointed out that there was too much power for ruling governments in the country, adding that such policies would never augur well for the country's political transition.

According to him, before there could be a proper political transition in the country, most of the power given to politicians should be directed to independent bodies that would be there all the time.

Felix Owusu-Adjepong, former majority leader and Minister for Parliamentary Affairs, said one could talk of six types of political and administrative transition in Ghana and explained that each of the above transition has its peculiarities and challenges.

He said it was time for Ghanaians never to allow authoritarianism in whatever form to prevail in the country.

Mr. Owusu-Adjepong pointed out that for a transition to be civil, it must be undertaken peacefully, responsibly and in a manner that transparently satisfies the aspiration of the broad masses of our people.

“This should be the duty of the out-going authority to ensure that the former appointees cooperate with the incoming administration so as to move the country forward,” he said.

According to him, it should also be the duty of the incoming administration to take whatever is handed over to them in good faith and to recognise that the change which brought them to power was a reflection that the broad masses had some misgivings about the performance of the previous regime.

Mr. Owusu-Adjepong wondered if the issue of political transition in Ghana is a matter of poor transitional arrangement or lack of good faith or mistrust.

He pointed out that the main reason for the acrimony in Ghana's governance system was not the poor transitional arrangement but rather, the deep-seated hostilities between the two parties during and after elections and the general mistrust among the followers of the two main parties.

Mr. Kwamena Ahwoi, a lecturer at GIMPA, also agreed with the various speakers and pointed out that there was too much power for government in the country, stressing that there should be an independent institution to handle issues concerning the development of the nation.

Dr. Emmanuel Akwetey, Executive Director of IDEG, on his part said the-winner-takes-all syndromes being practiced in the country's politics is something that is not helping Ghanaians to have quality decisions from the minority.

He said when such practices cease; all politicians who have rich ideas would not hesitate to grant their support to a ruling government.

According to him, it was very sad that the experiences and ideas of about 49% of the New Patriotic Party (NPP) was allowed to go waste because of the-winner-takes-all policies in the country's politics.

Dr. Sulley Gariba, Executive Director of IPA, said before Ghanaians rush into what could be described as hard law to steer the affairs of the country's politics, there was a need to first adopt the soft law.

He explained that most of the laws governing the country's policies were good and need not to be condemned.r