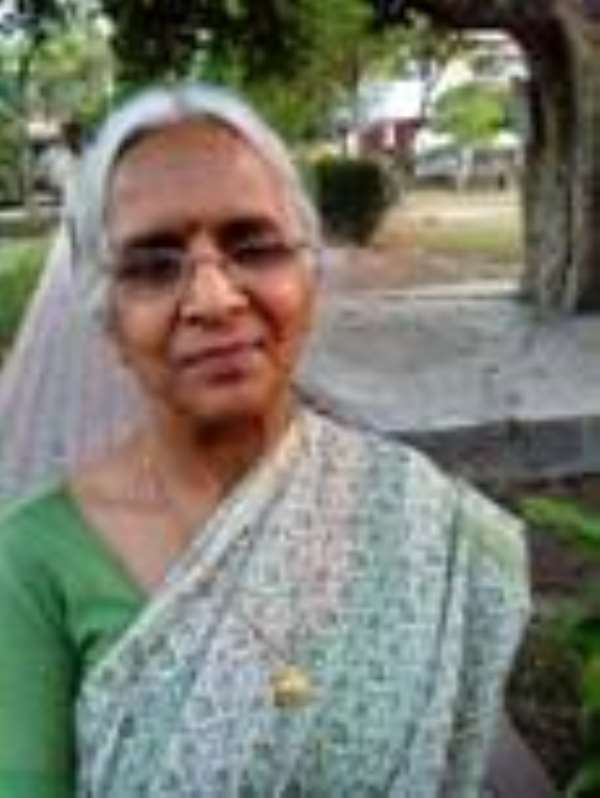 Yes, that is what Prabha Chaturvedi (resident of D-2/4 Paper Mill Colony, Lucknow) is lovingly known as in the circle of her friends and well wishers. A very socially committed person, she started an anti-garbage movement in 1993, with the support of a small group of women volunteers and her husband. During the course of her crusade for removal of roadside garbage, cleaning and de-silting of overflowing drains, she became a familiar figure at the local municipal office. She would often bang at their doors, forcing them to do their duty sometimes. At other times her complaints would fall on deaf ears. Nonetheless, she became a necessary nuisance for them and they thought she was really 'mad'. Well, mad she was to see the filth around her and also the public apathy towards the efforts of her volunteers. But her untiring efforts attracted the attention of Mr MB Nirmal, a social activist from Chennai. He was so impressed by her zeal that he invited her group to visit his NGO 'ExNoRa International', which was engaged in solid waste management.

Thus was born the ExNoRa Innovators Club, Lucknow , in 1996. This acronym stands for 'Excellent, Novel and Radical' ideas which can transform society. Ms Chaturvedi rightly believes that the root cause of pollution (in public life and in the environment) is WASTE - whether it is a waste of money, or of natural resources, or of words/ ideas. Hence an efficient management of all such waste is the need of the hour.

As far as garbage is concerned, it is best to reduce, reuse and recycle it, as far as possible. This garbage (generated by us) is polluting our rivers/water sources, poisoning the air we breathe and making our surroundings filthy. Yes, the government has failed in its duty of providing us with basic civic amenities. But are we, as civil society, doing anything worthwhile either? With just a little change in our mindsets, we can indeed do a lot.

So let us imbibe the 'mantra' of Prabha Chaturvedi and begin right away. Let us start reusing, rather than throwing away, our household garbage. It would take only a little will power to consciously decide to segregate this garbage into bio-degradable (organic) and non bio-degradable (inorganic) heaps. The former (bio-degradable) includes all kitchen waste, human hair, dead/dry plant leaves and incense/joss stick ash and likewise. All these wastes should be put under the soil of the house garden or a roadside tree or in a wooden crate lined with jute. They would gradually turn into nitrogen rich manure/soil nutrients. The inorganic non bio-degradable waste, consisting mostly of plastic bags, plastic bottles, gutkha or pan masala sachets, iron/aluminum scrap, broken pottery and glass, can be put in a separate bin and given to the rag pickers directly (to be recycled). This would decrease their workload of rummaging through garbage heaps and also decrease the roadside filth.

It is unfortunate that we keep on grumbling about the dirty surroundings, but do not want to take simple steps to make them clean, says Prabha ji. Surely, children could become harbingers of this change under the able supervision of the retired residents of the colony/housing society. Only when we make our environs clean and garbage free, will we be empowered to remove political pollution. We need to weed out (rather vote out) the poisonous elements and elect honest candidates who are sensitive to the needs of the under privileged.

The author writes extensively in English and Hindi media. She serves as Editor of Citizen News Service (CNS).