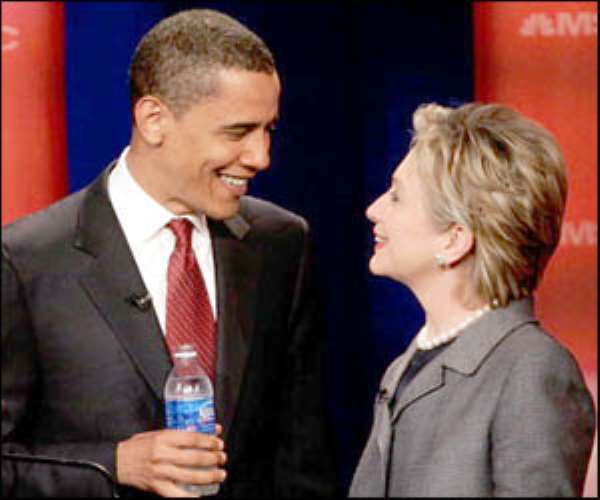 Barack Obama with Hillary Clinton US President-elect Barack Obama has nominated his former rival Hillary Clinton as his secretary of state. Mr Obama described the former first lady as a woman of "tremendous stature" who had his "complete confidence".

Mrs Clinton lost out to Mr Obama when the two contested a bitterly fought race for the Democratic Party presidential nomination.

Mr Obama said the time had come for a "new dawn of American leadership to overcome the challenges of the 21st century, and to seize the opportunities embedded in those challenges".

Mr Obama's foreign policy team under Hillary Clinton will reassure the more hawkish elements in the US, but might disappoint those who wanted a more radical shift, says BBC News website world affairs correspondent Paul Reynolds.

Mr Obama said of Mrs Clinton: "She's an American of tremendous stature who will have my complete confidence, who knows many of the world's leaders, who will command respect in every capital, and who will clearly have the ability to advance our interests around the world."

"Hillary's appointment is a sign to friend and foe of the seriousness of my commitment to renew American diplomacy and restore our alliances," said Mr Obama.

Although the two repeatedly clashed during the nomination race, Mrs Clinton went on to campaign for Mr Obama as he took on Republican John McCain in the race for the White House.

Correspondents said there had been fears her nomination could falter over the appearance of conflicts of interest between her husband's charitable foundation andlucrative speechmaking schedule. Mr Clinton has agreed to release the list of donors to his foundation by the end of the year, officials overseeing the presidential transition said. He has also agreed to submit future engagements, speeches and sources of income to the State Department and the White House and to take a more behind-the-scenes role in the daily running of his foundation, sources said.