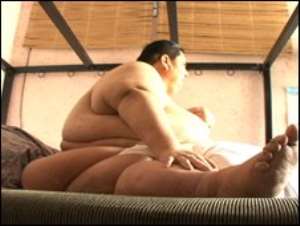 The Mexican who held the record for the world's fattest man and his fiancee
The world's heaviest man says he is to marry his girlfriend later this month after losing nearly half his original body weight.

Mexican Manuel Uribe said he and Claudia Solis would wed in his home town of Monterrey on 26 October.

Manuel, who has lost around 250kg (39 stones), said he would be steering clear of the wedding cake.
He would have just one bite for the cameras, but no more, he was quoted as saying.
"It will be a hefty wedding, on a large scale, but with a low-calorie banquet," he told the AFP news agency.

Proud fiance
Manuel Uribe has attributed his weight loss to the love and encouragement he has received from Claudia, whom he has known for four years. The couple have been engaged for two years.
He is currently only able to leave his house by being towed through the streets on his specially-made bed - and dreams of being able to walk again.

Manuel has been following something called the Zone Diet - eating carbohydrates, proteins and fats in a ratio of 40:30:30, supervised by a team of scientists and nutritionists.
However, some experts warn that not enough is known about the long-term effects of diets high in proteins.

Claudia is nevertheless proud of the progress her husband-to-be has made.
"Sometimes he is sad and cries because he cannot get off his bed," she told the BBC in July.
"But he is an example for other obese people to move forward. As he says: 'If I can, you can'."