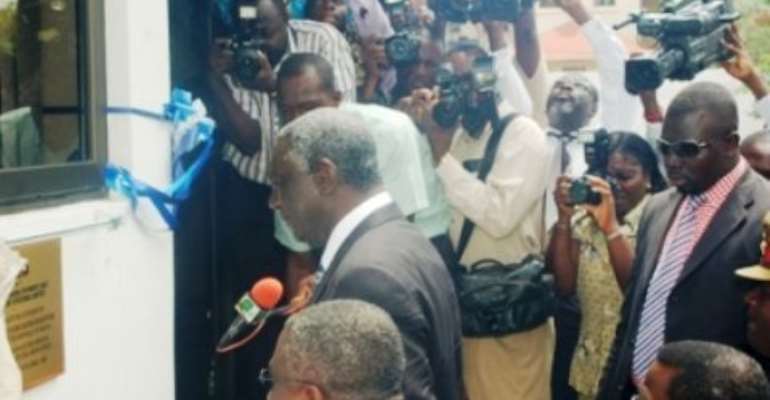 Prez Kufuor unveils a Plaque to launch the E-Zwich

President John Agyekum Kufuor yesterday launched a landmark payment and settlement system designed to transform and extend the coverage of financial services and transactions in the country.

The 'National Switch and Smartcard Payments System,' dubbed 'E-Zwich,' is an initiative of the Bank of Ghana (BoG) and provides a common platform to link the payments of all the financial and non-financial banking institutions.

The system, which is world class, can be readily accessed, easy to use for savings, payments and transfers and the management of various business transactions.

It is an integral part of the Government's overall vision of making Ghana the gateway to the West African sub-Region, a major financial hub, to become a significant player in the global financial market.

Launching it, President Kufuor said it was time the nation phased itself from the heavy dependency on cash and paper transactions as it steadily progressed into the middle-income status.

The technology, common place among emerging and developed economies, he noted, would not only facilitate access to and transfer of money but also remove the cumbersome and insecure processes of using cash.

President Kufuor was unhappy that despite dramatic growth in the banking sector engendered by reforms to develop and modernise the financial services industry and the stability in the macro-economic environment, there were many people still outside the financial system.

An estimated 80 per cent of the eligible population 'is still either un-banked or under-banked, and seems to have no access to financial services.'

He said the 'E-Zwich,' safe, secure and efficient as it was, should therefore help to change the situation by linking the financial services industry with every aspect of the nation's economy.

He drew attention to the need for small-scale and medium-scale businesses and those involved in micro-credit transactions to be encouraged to take advantage of the new platform so as to be connected to the financial system and benefit from the various services that the financial sector offered.

President Kufuor further asked those responsible for payment of salaries, wages, pensions and social support funds to rely on the technology to bring transparency and integrity to the payrolls. 'This card, which is safer and more convenient, should also help to solve the problem of paying cocoa farmers with cash or Akuafo cheque.'

Mr Kwadwo Baah-Wiredu, Finance Minister, said the system would allow for payments to be effected as quickly as possible to Government's employees and pensioners.

The Governor of the BoG, Dr Paul Acquah, said the 'E-Zwich,' was a safe and efficient payment infrastructure that would establish a level playing field for all the institutions in the financial services industry to compete. He likened the operation of the system to that of the mobile phone and said it could be used by anybody, anywhere to do business.

He said existing payments system had been working smoothly but needed to be further developed to the frontier of the industry in terms of standards, to suit the needs of the country's growing economy and to bring most economic activities into the financial system.

The Bank has also issued a provisional licence for a credit reference bureau to be established that would improve the flow of information necessary for informed assessment and pricing of risks, while protecting the confidentiality of such information and credit worthiness of borrowers.

Dr Acquah lauded the legislative reforms that had made it possible for a modern banking and financial services industry, especially the Banking Amendment Act, the Payment System Act, and the CSD Act, among other Laws. According to him a safe and efficient payments system was a key component of the economic and financial infrastructure.

Mr Joseph Nii Badu Tetteh, Acting President of the Ghana Association of Bankers, said the banks would continue to expand their frontiers through innovative products to ensure the provision of adequate financial services to all.

Domelevo rubbishes Audit Service claims he owes about $4,020...
14 minutes ago