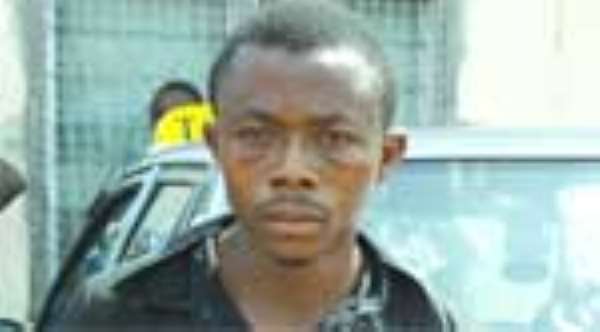 KWAME ASUKUM, 28, a lotto operator has been grabbed by the police for car robbery.

Asukum, an indigene of Chichiriga in the Upper East Region, together with four others, attempted to rob a driver of his taxicab at knife point, at Bantama, a suburb of Kumasi.

The incident occurred at the Bantama market area around 10:00 pm last Wednesday evening.

Luck however eluded Asukum, when at the brink of taking away the KIA Pride taxicab with registration number GT 4691 G belonging to one Daniel Amponsah, a police petrol team arrived at the scene and apprehended him.

However, his other four accomplices, who are still at large, managed to escape.

Inspector Mohamed Yussif Tanko of the Public Affairs Unit of the Ashanti Regional Police Command, told the media that the suspect hired the taxi from Bantama to Bohyen.

He said immediately Asukum got into the car he put a knife at the throat of the driver, after which his other four cohorts joined the car.

Inspector Tanko continued that confusion erupted between the suspects and Amponsah, and it was at that time that the police petrol team arrived at the scene and arrested Asukum while the others fled.

He noted that upon interrogation Asukum stated that he joined the car snatching syndicate three months ago and that they had succeeded in snatching three cars at the same spot.

According to him, Asukum said they used the stolen taxis to rob unsuspected passengers of their valuables, adding that since joining the syndicate he had acquired four mobile phones, all of which he had sold.

Inspector Tanko asked victims of car robbery in the metropolis, especially those who had their experiences around the Bantama market area to come and identify the suspect.