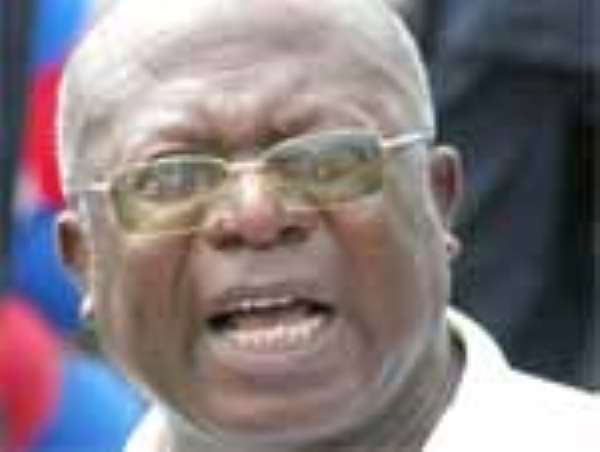 Dr. Kwame Amoako-Tuffour, Executive Chairman of the Ghana School Feeding Programme (GSFP), has been relieved of his post.
The dismissal, which was confirmed by Information Minister, Oboshie Sai-Cofie, and Kwadwo Adjei-Darko, Minister for Local Government, Rural Development and Environment, was part of a re-structuring exercise to inject efficiency into the programme.

According to the Local Government minister, Dr. Amoako-Tuffour was sacked in order to pave way for investigations into the activities of the programme.

The dismissal letter, according to Mrs. Sai-Cofie, was delivered to Dr. Amoako-Tuffour on Tuesday afternoon.

Speaking on Peace FM, Hon Adjei-Darko noted that in every organisation, trust was the bedrock of operations, and inferred that the chairman's presence could compromise efforts to bring sanity into the GSFP.

This is the second time Dr Amoako-Tuffour is losing a high-profile job since the NPP took over the reins of government in 2001, having been sacked as the chairman of Ghana Civil Aviation Authority (GCAA) under very controversial circumstances.

DAILY GUIDE learnt that following allegations of misappropriation of funds and other related concerns raised by auditors and trumpeted by the Committee for Joint Action (CJA), the President, John Agyekum Kufuor, set up a committee chaired by the Chief of Staff, Kwadwo Okyere Mpiani to look into the operations of the GSFP.

The audit conducted by Pricewater House Coopers, at the instance of the Royal Dutch Embassy, unearthed some administrative lapses in the operations of the programme.

The Kwadwo Mpiani Committee, of which the Local Government Minister was a member, also spotted some anomalies including alleged inflation of enrolment figures in a number of schools.

Even though the dismissal was not officially linked to the call of the CJA, some observers saw it as a proactive decision by government.

About four weeks ago, the CJA, an anti-government political pressure group, called for the immediate dismissal of Dr. Amoako-Tuffour for alleged financial malfeasance and feeding of school kids with unwholesome meals.

The CJA claimed that an audit report, which was prepared by Pricewater House and submitted to the Minister of Local Government, Rural Development and Environment, Kwadwo Adjei-Darko, had revealed that the operations of the programme had been enveloped in deep corruption, nepotism, and the use of children as labourers.

Speaking at a press conference, the Managing Editor of the Insight newspaper, Kwesi Pratt told journalists that money amounting to ¢363,549,000, which the Ghana School Feeding Secretariat claimed to have transferred to 10 districts, were not received by those districts and that the secretariat had also awarded various contracts to ghost companies.

“The school feeding programme has become an avenue to steal state resources at the expense of the public and to the disadvantage of little school children; the extent of corruption, maladministration, nepotism and patronage is so excessive that the programme has become a complete shamble”, Mr. Pratt added.

Mr. Pratt stated further: “It is a matter of grave concern that children in five regions were served with food prepared with unwholesome tomato paste supplied by Afrique Link.

“It is especially sickening that in several cases, it was not even possible to ascertain the expiry dates of the tomato paste since they had been painted over to conceal the expiry dates but in spite of this, the supplier, Afrique Link, was paid more than ¢2 billion for the deal.”

But reacting, Dr. Amoako-Tuffour dismissed the CJA claims and said he would rather welcome a forensic audit to determine whether he had been involved in any misconduct.

He admitted that there had been some wrong doings by some employees of the School Feeding Programme but that had been investigated and the offenders dealt with; thus the call for his resignation was rather absurd.

According to him, the CJA only wanted to score political points else they would have gone to the secretariat to crosscheck whatever information they had before going public.

He also denied that school enrolment figures had been inflated, saying the GSFP got its figures from the districts and the schools.

On the claims of feeding children on expired tomatoes, he said when the issue was brought to his attention, the product was withdrawn from the field.

Tuesday's dismissal was greeted with mixed reaction.
While Okudzeto Ablakwa of the CJA said it was welcome news, Hajia Amina Gado of Tema condemned the action, saying people were envious of the success Dr Amoako-Tuffour had chalked.

The GSFP was recently lauded in Italy when President Kufuor delivered an address at the World Food Programme summit, with many countries opting to emulate the Ghanaian example.
The programme was the collaborative effort of the government of Ghana and the Dutch government.

Meanwhile, Dr. Amoako-Tuffour has filed a suit at the Accra High Court against Mr. Kwesi Pratt Jnr. and four others for defamation.

Those joined in the suit are Mr. Ato Ahwoi, Ms. Ama Benyiwa Doe and Mr Samuel Okudzeto-Ablakwa, all politicians, and members of the Committee for Joint Action (CJA), a pressure group.

Dr. Amoako Tuffour is claiming general damages for libel and slander and an injunction restraining them from further publishing or causing to be published similar defamatory words.

In his statement of claim, he said the defendants, claiming to be members of the Committee for Joint Action (CJA), released a press statement in which they demanded that he should be dismissed as Executive Chairman of the School Feeding Programme.

They also said the government must set up an independent public inquiry to investigate the activities of the programme and that all those who are known to have committed fraud or other criminal offences should be prosecuted.

He said the press statement of the defendants were understood to mean, among other things, that he used resources of the programme to his personal advantage and that of his friends, that he is a thief, stole from the project, supervised looting from the project, is corrupt and a fraud.

The plaintiff says that the defendants have falsely and maliciously written and published the words complained of even though the plaintiff had persistently made numerous efforts to address perceived and actual lapses within the School Feeding Programme.

The suit said the plaintiff had been greatly injured in his credit and reputation.