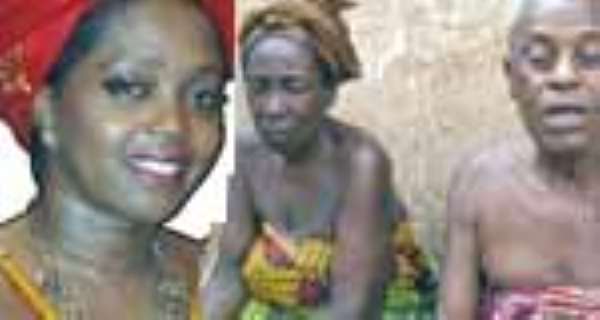 CONTROVERSIAL SHOWBIZ figure, Lady Tamara, who has metamorphosed into a businesswoman, on Sunday night stormed the 'Akonedi' shrine at Larteh-Akuapem in the Eastern Region with the help of some hired 'machomen' to collect the corpse of the chief fetish priestess of the shrine who died about five months ago.

She was alleged to have taken the corpse to an unknown destination.

Tamara, who was wielding a gun, supposedly fired a warning shot to ward off any opposition and also pave the way for the 'machomen' to break into the new 'Akonedi' palace just behind the old one at Asenase, where the embalmed corpse of the chief priestess had been kept under lock and key pending a befitting funeral for her between April 30 and May 2 this year.

Tamara's unexpected 'hollywood' action at the 'Akonedi' palace which took place around 8.00pm, left many people in the area running helter skelter, with a few family members breaking bottles to resist. But she overpowered them and took the corpse.

Nana Okomfo Amma Agyeiwaa I, who became the chief priestess of the 'Akonedi' shrine in her teens and died at age 95 on November 12, 2007, had been of immense help to Tamara, the “Nkosuohemaa” of Larteh-Akuapem.

Tamara, also known as Nana Esi Okoree, was said to have adopted the chief priestess as her mother after being blessed by the deceased.

The priestess was said to have taken care of Tamara anytime she came to the country after her business trips abroad.

The family members of the chief priestess had said that Tamara wanted to undertake the funeral single-handedly against their wishes, which had created the current conflict.

A spokesperson of the family, Opanin Kwesi Adjei told DAILY GUIDE that “even though Tamara had expressed the desire to single-handedly do the funeral of our old lady, we told her that custom does not allow her to do that and that if she had any assistance she could give it to the family towards the organisation of a befitting funeral for the priestess.

“Tell the whole world that Tamara has come to steal a corpse that does not belong to her!”

According to the family spokesperson, Tamara who also hails from Larteh-Akwapim would always want to have her own way because of the fact that “she has money and can influence anybody”.

A source told DAILY GUIDE that Tamara had a close relationship with the chief priestess because of what she (priestess) had done for her in times of difficulty.

Tamara was said to have come for the priestess when she fell ill and sent her to her home in Accra where she invited special doctors to take care of her.

DAILY GUIDE gathered that Tamara took care of the chief priestess until she unfortunately passed away in November last year.

She then came to inform the family members and brought the body to Larteh where it was embalmed and kept at the palace because customarily, a festish priestess is not supposed to be kept at the mortuary when she dies.

Because of her importance and special role at the shrine, the body of the chief priestess was kept at the new 'Akonedi' palace under tight security.

According to the information, as soon as the chief priestess passed away, Tamara was said to have announced to the family that she would single-handedly do everything concerning the funeral and burial, but the family members objected to it because they thought Tamara was “going too far” since she was not a family member.

They therefore took custody of the corpse and fixed the funeral and burial for the ending of this month, until Tamara unexpectedly struck to take the corpse from where it was being kept.

Even though the family members did not know where the body had been taken to, rumours had it that Tamara had sent it to Accra.
The family members are in limbo as to whether the announced burial and funeral date would still hold.

Obituary posters had been pasted all over Larteh and other Akuapem towns, announcing April 30-May 2 as the funeral date for the late chief fetish priestess of the 'Akonedi'.

Meanwhile the family members have refused to report the case to the Larteh police because they alleged that the police personnel there had also been 'bought' by Tamara and that when they report the incident to them, no action would be taken against her.

They have however reported the case to the chief of the town, Nana Asiedu Ababio III, who promised to help resolve the matter.
Several attempts by DAILY GUIDE to reach Tamara for her side of the story proved futile.