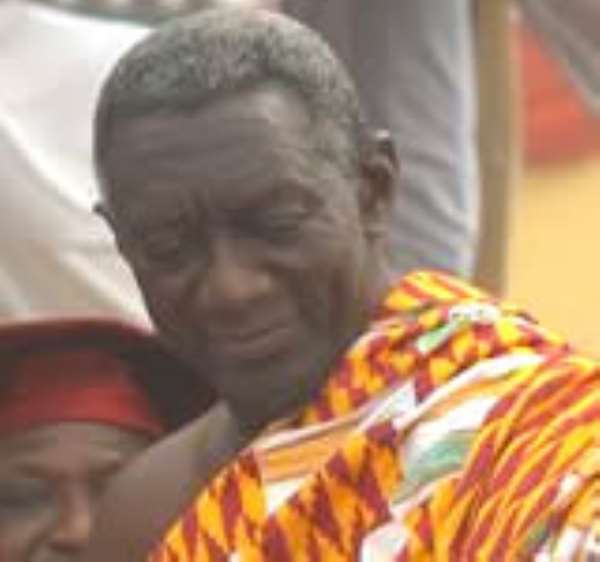 
Ghana and Brazil, amidst growing economic partnership on Saturday, signed four agreements to boost technical cooperation in the areas of agro-energy, health, bio-diversity of cassava and the fight against HIV-AIDS infection.

Added to this was a Memorandum of Understanding on co-operation in the energy sector.

This followed bilateral talks held between President John Agyekum Kufuor and his Brazilian counterpart, President Inacio Lula da Silva, who is in the country to attend the United Nations Conference on Trade and Development (UNCTAD), at the Castle, Osu.

Speaking before going into the closed session talks, President Lula da Silva said his country had made Africa a priority in its international relations.

He said he was convinced of the support they could provide to transform agriculture on the Continent to enable it to achieve food security.

He made reference to Brazil's savanna agricultural land, which 40 years back, was considered as waste land but through technology had now been transformed into very productive land.

“The same can be done in Ghana and other parts of Africa,” he said.

President Lula da Silva said in the 21st Century, developing nations did not need to rely on aid from the rich countries.

What such countries required, he said was access to technology and funding.

He called for more flexibility to give market access to agricultural products from the poor countries and the removal of agricultural subsidies by the rich countries.

Brazil, he said, was seen as a leader of the South and that they looked up to it to provide guidance and leadership to enable them to mainstream themselves into globalisation.

He said he was confident that the Brazilian President would give the leadership they expected at the UNCTAD for a fairer trade between the developing and developed countries.

President Lula da Silva, earlier, received a warm welcome on arrival at the Jubilee Lounge of the Kotoka International Airport.

President Kufuor, Ministers of State and Members of the Diplomatic Community were on hand to officially welcome him when the Presidential Jet carrying him touched down at 0940 hours.

After exchange of pleasantries at the foot of the gangway, he was escorted to a saluting dais, where the national anthems of Ghana and Brazil were played by the Military Band as the deafening sound from the traditional 21-gun salute filled the air.

He later inspected a Military Guard of Honour and was treated to some beautiful cultural display.