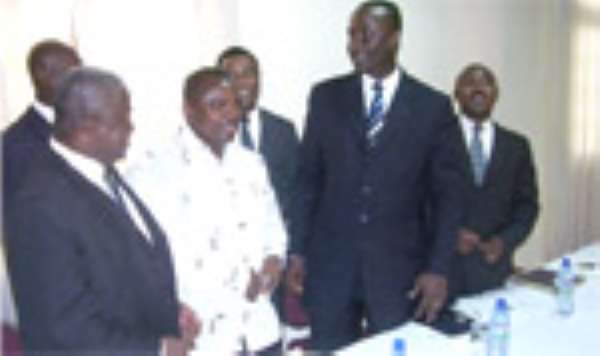 Ghanaians will soon eat bread made from cassava flour, when a project to produce composite floor takes off in the country.
Composite flour consists of 20 percent of hybrid cassava flour and 80 percent of wheat, and does not reduce the quality of the flour.

The use of cassava flour in the production of bread is one of the measures instituted by government to contain the current food crisis facing the world.

Research has been done on the use of cassava flour with wheat flour for the production of bread, but legislation to enable flour mills to implement the process would soon be passed.

Ghana does not produce wheat but bread produced from wheat flour is a large part of the diet of many Ghanaians. The wheat is normally imported and the flour milled in the country.

This was made known by the Minister of Food and Agriculture, Mr. Ernest Debrah in an interview with Joy fm's Akwasi Sarpong.

He said the government is considering measures that will help maintain current food prices in the country. He said in addition to sustaining the current food supply in the country with regards to food production, government is also looking at how to deal with the possible situations that might occur with regard to imported foods like rice and wheat.

He said Ghana, unlike her neighbours has stable food prices, and that is why the country has not experienced food related riots.

He said lots of structures have been put in place to produce good quality rice in Ghana. He revealed that experiments are ongoing for the production of what is known as 'Nerica' or New Rice for Africa.

These measures he said would reduce the importation of rice and increase local production.

In his opinion therefore, to meet the crisis, there is the need for what he calls a “New Deal on Global Food Policy.”

While many are worrying about filling their gas tanks, others are also struggling to fill their stomachs, the World Bank President said.

He called on governments to fill the $500 million food gap identified by the United Nations' World Food Programme (WFP) for the “immediate crisis.”

Under the New Deal, the World Bank will nearly double agricultural lending to Sub-Saharan Africa over the next year to $800 million to substantially increase crop productivity.