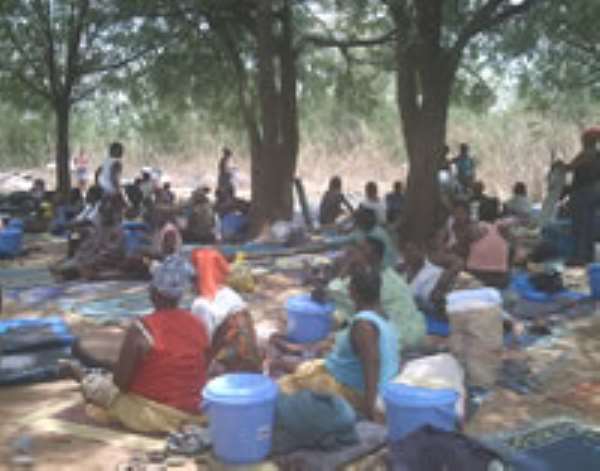 
Government has taken a firm decision that all 26,967 Liberian refugees in Ghana should return home, Mr. Kwamena Bartels, Minister of the Interior said on Tuesday.

He said government had since requested for the invocation of the Cessation Clause under Articles 1(4) of the 1969 OAU Refugee Convention because the ground on which they remained in Ghana was no longer valid.

The Minister said this had become necessary as the refugees themselves had stated that, “they do not want to be integrated into the Ghanaian society and that they would resist local integration with all their might”.

Mr Bartels, who was addressing journalists at the meet-the-press series in Accra, said government would no longer tolerate the situation where people who had been given hospitality continued to undermine the security of the state.

“Our national security is supreme and shall not be compromised on any account,” he said, adding that, refugees had the responsibility to respect the laws as well as refrain from subversive activities against the state, which had given them a home for the past 18 years.

On February 19, a group of Liberian refugees embarked on an illegal demonstration at the Buduburam Refugee Settlement demanding that they did not wish to be integrated into the Ghanaian society and that they wished to be resettled in a western country. They also said they wanted each Liberian refugee opting to voluntarily repatriate to be paid 1,000 US dollars.

Many attempts by government officials and the United Nations Humanitarian Commission for Refugees (UNHCR) to convince the leadership of the refugees to take off the demonstrators from the highways was not adhered to.

The demonstrators also prevented charitable organisations from distributing food to the elderly, sick and children most of whom rely heavily on the food distribution.

These developments led to the arrest and deportation of some of the ring leaders.

Mr. Bartels said no Liberian refugee in Ghana was here on account of fear of persecution and it was the belief of Government that the vast majority of them could return to Liberia in safety and dignity.

“All Liberian refugees in Ghana are refugees under the 1969 OAU Convention Governing the Specific Aspects of Refugee Problems in Africa and not under the 1951 UN Refugee Convention and its 1967 Protocol.

“Today, there is absolute peace in Liberia and its citizens continue to return home without fear. Liberia has established herself as a respected and accepted member of the International Community where democratic governance structures are in place,” he said.

He said, at a meeting with a high-powered delegation of the Liberian Government, it was agreed that a Tripartite Committee made up of Ghana, Liberia and UNHCR be established to work out the practical modalities for repatriation of the Liberian refugees starting with those who opted to voluntarily repatriate on the UNHCR sponsored programme.

According to the Minister, the meeting also agreed that the refugees be dispersed and settled in smaller communities for better management and monitoring.

Mr. Bartels gave the assurance that Ghana would continue to honour her obligations under the various refugee conventions she is party to and continue to champion the cause of Africa to ensure that peace and security prevailed over the entire continent.