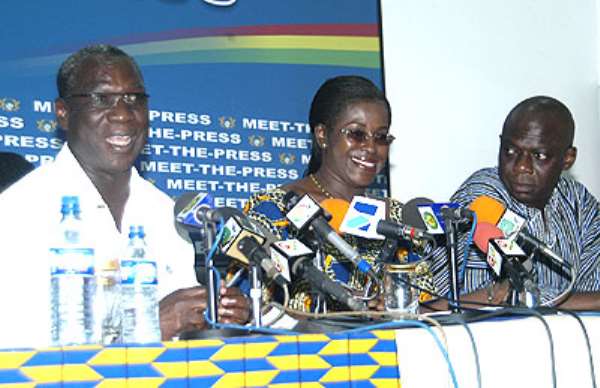 The Minister for Food and Agriculture, Hon Ernest Debrah (left) addressing the media. With him are Hon Mrs Oboshie Sai Cofie (middle) Minister for MINO and her Deputy, Mr Frank Agyekum

The Minister for Food and Agriculture, Hon Ernest Debrah has disclosed that from the year 2000 through to 2006, the Cocoa Sector, Crop Sector and the Fisheries sector have increased by 33.3% with the Cocoa sector doing exceedingly well in the year 2004 which has accounted for a 7% growth rate.

Briefing the media today at the “Meet the Press” series organised by the Ministry of Information and National Orientation, Hon. Debra said, 740,000 metric tonnes of cocoa was produced in 2006 with the Ministry targeting to reach one million metric tonnes by the year 2010.

With the development in food crop sector, the Minister said Ghana is about 96% self sufficient in maize with yam being 36.9%, plantain 13.1%, Cocoyam 11.7%, livestock 30% and fisheries 58%.This, the Minister said, the country is self- sufficient in most of her staple food items such as cassava, yam and plantain. “The country is yet to achieve self sufficiency in rice, fish and meat” he added.

Improving irrigation in the country, Hon Debra said, the Ghana Irrigation Development Authority (GIDA) has prepared a national irrigation policy strategy and regulatory measures to guide irrigation development in Ghana. Nine deteriorated and abandoned irrigation facilities have been rehabilitated to enhance the production of rice and vegetables.

The rehabilitation has been completed and the installation of pumps to make the schemes operational to be completed at the end of March 2008.

The irrigation facilities are situated at Weija in the Greater Accra Region, Aveyime, Afife and Kpando Torkor all in the Volta Region, Sata and Akumadan in the Ashanti region, Tanoso Subinya in the Brong Ahafo Region and Bontanga in the Northern Region, the Minister said.

On developing horticulture in the country, Mr Debra said 'the Ministry has refurbished shed 9 at the Tema Port into a modern fruit terminal with the capacity to hold about 2,040 metric of produce with an annual throughput of up to 300,000 metric'. This facility is fitted with all the necessary equipment to make it one of the modern fruit terminals in Africa.

According to the Minister, Ghana is the only African country that has been adjudged by the International Community as the best country to deal with the out-break of the Avian Influenza also known as Bird Flu.

He said the out-break was the major animal health challenge in the year and that “Government has so far paid GH�160,000 as compensation to the farmers”, the minister noted.

In order to provide gainful employment for the unemployed and underemployed youth, particularly those in the rural areas so as to improve their living conditions and encourage them to stay in the rural areas instead of migrating to the urban areas, the Ministry of Food and Agriculture has instituted the Youth in Modern Agriculture Programme which will support at least 66,400 unemployed youth in 35 districts to cultivate a minimum of two hectares each with food crops under the block farming system by 2010.