Mr. Bagbin Is Not a Wise Man 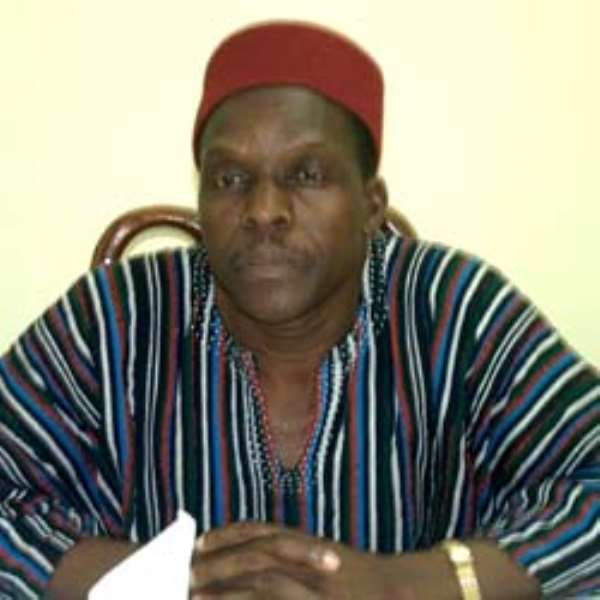 When the NDC minority leader in the Ghanaian parliament swears against the presidential candidacy of Nana Addo-Dankwa Akufo-Addo, he does so almost solely based on sheer envy and personal animosity. For, it goes without saying that Mr. Alban S. K. Bagbin is no peer, or equal, of Nana Akufo-Addo's, achievement-wise. After all, which political party but the P/NDC could have crowned the Nadowli-West Member of Parliament as its minority leader? In sum, had he been a member of the ruling New Patriotic Party (NPP), it is almost certain that Mr. Bagbin would have had to contend himself with being just another member of the Ghanaian parliament, and not the entrenched crown prince of the Rawlings Corporation. And with what we know of the criminal and undemocratic record of the P/NDC, it was nothing short of the outright risible and grotesque to hear Mr. Bagbin impugn the professional and personal integrity of Nana Akufo-Addo.

For instance, in a Daily Dispatch article titled “Bagbin: Akufo-Addo Can't Be President” (3/3/08), the Nadowli-West NDC-MP questions why “after all these sacrifices and [staunchly] supporting [President] Kufuor throughout [the last eight years], [Mr. Kufuor] went [on] to support Alan Kyerematen?”

Indeed, if he were adequately endowed with a good conscience and a remarkable sense of judgment, Mr. Bagbin would rather have directed his plaint – or query – to the President, rather than facilely presuming that Mr. Kufuor's apparently gratuitous decision to secretly undermine the presidential candidacy of Nana Akufo-Addo had anything to do with the integrity of the current NPP presidential candidate, rather than either the blighted judgment or flawed integrity of President Kufuor or both, or even neither! After all, as a quite prominent member of the parliamentary opposition, Mr. Bagbin has the sort of ready access to the President that even most of his parliamentary colleagues' lack.

It is also interesting that in questioning President Kufuor's flat refusal to back the presidential candidacy of Nana Akufo-Addo, Mr. Bagbin does not, in anyway, suggest that his evidently nepotistic and ostentatious backing of Mr. Alan Kyerematen was the best – or ideal – thing for President Kufuor to do. If anything at all, it glaringly appears to Mr. Bagbin that the President's blatant preference of Mr. Kyerematen over Nana Akufo-Addo might, indeed, be tinged with something other than the purely professional, or ideological, quite possibly a personal vendetta that Mr. Kufuor may harbor against the dauphin of former Supreme Court Justice and President Edward Akufo-Addo. And here, also, must be hastily added the curious fact of Mr. Bagbin having vociferously backed the reappointment of Dr. Richard W. Anane, as Minister of Road Transport, against the collective protest of Mr. Bagbin's own party. Could it be aptly inferred that the NDC parliamentary minority leader found his fellow NDC-MPs to be sorely lacking in moral judgment? Or primarily because Mr. Bagbin finds Dr. Anane's reprehensible moral conduct (one that has been widely condemned by even leading members of the ruling New Patriotic Party) as a cabinet minister to be standard moral fare among the leading members of the so-called National Democratic Congress?

Having registered the preceding observations, it becomes rather curious to hear Mr. Bagbin claim that merely because Nana Akufo-Addo was Mr. Kufuor's runner-up, or closest rival, during the 1998 NPP presidential primary automatically rendered Nana Akufo-Addo the President's presumptive successor, heading into the 2007 NPP presidential primary, otherwise known as the National Delegates' Congress.

Of course, the preceding only goes to show how grossly the NDC minority leader misunderstands the culture of electoral democracy. Needless to say, what makes Nana Akufo-Addo uniquely qualified to be the next President of Ghana is squarely predicated on the fact that, unlike the NDC's Prof. John Evans Atta-Mills who was shamelessly “crowned” presidential candidate a la Mr. Rawlings' peremptory and unilateral Swedru Declaration, the NPP flagbearer was democratically elected through a hard-fought campaign and congressional balloting.

Furthermore, the notion that the Abuakwa-South NPP-MP ought to have won his flagbearership via a “one-touch” electoral process, eerily underscores the acute and worrisome lack of adequate familiarity with electoral democracy on the part of NDC political fixtures like Mr. Bagbin, and thus all the more reason for the Ghanaian electorate to massively vote for the ruling NPP in order to guarantee the protection and integrity of our Fourth-Republican democratic culture.

Mr. Bagbin also, rather sophomorically, claims that Nana Akufo-Addo's purported failure to be named, or elected, President of the Ghana Bar Association (GBA) must be due to “something in [the NPP presidential candidate] that convinces people that he cannot win and be a good leader.” Indeed, were he a deep thinker, Mr. Bagbin would also have focused on the quite plausible fact of the majority of the membership of the Ghana Bar Association, including the critic himself, being too judgmentally defective and even petty-minded to dispassionately recognize the astute and sterling professional qualities in Nana Akufo-Addo. But even more significant must be observed the fact of Nana Akufo-Addo having served as President of the Greater-Accra Regional Bar Association, the most important of its kind in Ghana!

Then also, contrary to what he wants P/NDC supporters and sympathizers to believe, voting Nana Akufo-Addo into power as President of Ghana would imply the salutary and further strengthening of Ghana's fledgling culture of electoral democracy. It would also mean the sensible and incontrovertibly progressive endorsement of such critical NPP policies as the National Health Insurance Scheme (NHIS), as opposed to the criminally iniquitous P/NDC Cash-and-Carry (C&C) public health policy, as well as the School-Feeding Program for elementary pupils, the Capitation Grant and the Fare-Free busing policy for schoolchildren.

Indeed, when leading members of the P/NDC decry the purported upsurge in national crime wave, politicians like Mr. Bagbin conveniently and selectively forget the fact that it was the gangland-style of “weapons democratization” by Mr. Rawlings, in the creation of such paramilitary terrorist organizations as the Commando Forces, that induced the current upsurge in national crime-wave statistics.

And, finally, talking of violence, it is rather unconscionably hypocritical for Mr. Bagbin to even remotely imply, as he appears to do, that the Rawlings regime could, in any way, be favorably compared with Mr. Kofi Annan's tenure at the United Nations.

Needless to say, when the Nadowli-West NDC-MP alludes to Nana Akufo-Addo having allegedly employed violence against the supporters of Mr. Owuraku Amofa, a onetime misguided member of the Rawlings Corporation, I, literally, feel like throwing up. Indeed, it is very certain that the NDC minority leader is fully aware of the fact that Mr. Owuraku Amofa, a former NDC deputy minister, had to flee Ghana, back to New York City, to save himself from certain Mafia-style execution at the hands of the pistol-packing “President” Jeremiah John Rawlings.