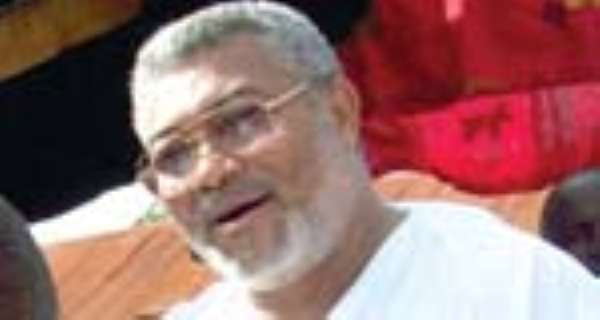 The Maamobi-based NDC supporter was among a number of people who jumped to the defence of the flagbearer in this challenging time.

According to Alhaji Bature, Mr. Rawlings was behind Wednesday's call by the Lower Manya Krobo MP, Michael Teye Nyaunu on Prof Mills to step down for the party to elect a healthy candidate, daring him to deny the accusation.

Speaking to DAILY GUIDE yesterday, the host of Alhaji & Alhaji on Hot FM said the NDC founder had used every attempt to dislodge the flagbearer since Mills was elected in December 2006, stressing that he was not surprised that Rawlings was using the Krobo MP to achieve his agenda.

According to the radio talk show presenter, the “issue was too big for Nyaunu” to handle if there were no powerful forces behind him.
“Rawlings should live above pettiness,” he said, stressing that God was not an author of confusion.

Hon Nyaunu, on Wednesday, threw caution to the wind and stuck his neck out in the lingering issue of Prof Mills' health, saying that the NDC flagbearer was sick and should therefore step down.

He suggested the holding of an emergency congress to elect a new leader who can stand the rigours of the electioneering campaign.

Nyaunu said Prof Mills could not take the NDC to the Promised Land with his current state of health. “The NDC should be bold enough to go for a new candidate because he wouldn't be able to withstand the heat during the elections,” he said.

But Alhaji Bature dared the former President to deny that he had nothing to do with the Krobo MP's bombshell.

The radio presenter explained that the NDC founder has not hidden his dislike for Prof Mills, seeking every opportunity to undermine the flagbearer's campaign.

He warned Rawlings to desist from meddling in the affairs of the party. “It is sad that the party he helped to form would be destroyed by him,” Bature charged.

He said he would prove it in the course of time that the former President was behind the plot to ditch Mills, pointing out that he would not succeed.

However, Bature could not mention the preference of the former President.

He said the founder was strongly against the re-election of Prof Mills, but never made his choice open in the run-up to the party's presidential congress in December 2006.

DAILY GUIDE learnt that Rawlings' dislike for Mills stems from decisions the former vice president took which did not go down well with the former president.

Sources said Prof Mills, who enjoyed the support of his former boss, first incurred the wrath of Rawlings when against his instructions, he bypassed Dr. Obed Yao Asamoah, former Attorney General and Minister of Justice for his deputy, Martin Amidu as running mate for the 2000 elections.

Prof Mills also turned down his former boss' suggestion to pick John Mahama as running mate for the 2004 election.

In addition, the NDC flagbearer turned deaf ears to Rawlings' advice to reject the 2004 election results by hitting the road.

All these incidents were said not to have gone down well with Rawlings, making him invite Ekwow Spio-Garbrah, Chief Executive Officer of the London-based Commonwealth Telecommunications Organisation (CTO) and Eddie Annan, a business mogul and friend of Mills to contest for the party's flagbearership for the 2008 polls.

Mills won the congress but sources said he has never enjoyed the support of the founder, who is said to have been working behind scenes to undermine the flagbearer's campaign.

DAILY GUIDE learnt that the NDC leadership rose from a crisis meeting, after setting up a committee to investigate the circumstances that led to Nyaunu's utterances.

The tense three-hour meeting was said to have been very critical about the Krobo MP's attitude.

Nyaunu was grilled for sidestepping party channels and taking his grievances to the media.

He had said that the NDC should not bury its head like the ostrich, insisting that Prof Mills was sick.

According to him, even though it was a painful conclusion to come to, he felt it would be in the larger interest of the party to drop Prof Mills, saying his state of health was bad.

“You need not necessarily be a doctor to know that someone is sick when you see the person. I say the man is sick. Period,” he said.

The MP was adamant yesterday, insisting that he has no regrets.
He said the Prof Mills he knew in 2006 at the NDC congress at the University of Ghana, Legon was not the same person he saw before he left for South Africa, indicating that his health was deteriorating.

Asked if he would change his mind, Nyaunu retorted, “How can I change my mind when it is mine?”

The unexpected attack on the NDC flagbearer caught members of his campaign team pants down, with some of them fumbling for words.

Prof Mills, who was virtually on all radio networks last week Thursday, reacting to a similar publication about his South African trip was quiet yesterday.

He was nowhere to talk to any radio station except comments from his handlers that they had spoken to him.

He was said to have taken a philosophical calmness about the challenges he was going through in his quest to lead the NDC to regain power.