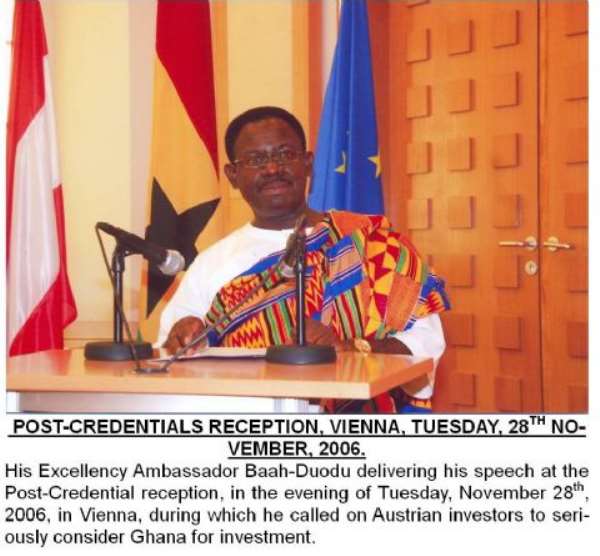 His Excellency Mr. Kwabena Baah-Duodu, Ambassador of Ghana to Switzerland and Permanent Representative to the UN Office in Geneva, who is concurrently accredited to Austria, presented his Credentials to the Federal President of Austria, His Excellency Dr. Heinz Fischer on Tuesday, November 28th, 2006 at the Federal Chancellery in Vienna. He was accompanied by Mr. Daniel Okaiteye-Blessyn, First Secretary, Embassy of Ghana, Berne, Switzerland

In a discussion following the presentation, Dr. Heinz Fischer expressed his gratitude to Ghana for its support for Austria's bid for a non-permanent seat in the United Nations (UN) Security Council and stated that his country would reciprocate Ghana's gesture at the appropriate time.

On his part, Ambassador Baah-Duodu noted the cordial relations that had existed between Ghana and Austria since the mid 1960s and stressed the need to translate those relations into productive economic and technical cooperation.
The Ambassador underscored the resurgence of Ghana's economy, which he attributed to the present Government's prudent policies. He observed, however, that those efforts by Government required assistance from its development partners to propel the country into a middle income status by 2015, as envisaged by Government. He pledged to work with his Austrian collaborators to intensify the cooperation.

At a reception organized in Vienna later in the evening to mark the occasion, Ambassador Baah-Duodu stated further that the seriousness with which the Government of Ghana had tackled the economic problems of the country so far had demonstrated its determination to create a congenial investment climate for the flow of foreign direct investment and other private capital inflows from foreigners and Ghanaians, both local and abroad, into the country. In this regard, he called on Austrian and diasporan Ghanaian investors to seriously consider Ghana as the most viable and profitable investment destination in Africa.

During discussions with the Director-General of UNOV, Ambassador Baah-Duodu reaffirmed Ghana's determination to play a positive role in the United Nations in solving some of the challenges threatening the international community.
At the IAEA, Ambassador Baah-Duodu noted, with appreciation, the high level of cooperation existing between Ghana and the Agency and indicated his determination to further strengthen those relations.

Referring to the technical assistance given to Ghana to establish a Post Graduate School of Nuclear and Allied Sciences at the University of Ghana, Legon, he expressed the hope that the Agency would continue to assist the country in its search for alternative sources of energy. Efforts being made by Ghana to secure funds for the installation of a third radiotherapy equipment in Tamale for the diagnosis and treatment of cancer, as well as the practical application of nuclear technology particularly in Ghana's agriculture were also discussed.

At the Preparatory Commission of the CTBTO, the Executive Secretary, Mr. Tibor Toth, expressed his appreciation to Ghana for signing the Comprehensive Nuclear-Test-Ban Treaty and encouraged Ghana to take the next step by ratifying the treaty. The Executive Secretary also briefed the Ambassador on the activities of the CTBTO, which focused on the benefits that Member States could enjoy from the Organisation, particularly in terms of access to specialized services and products.

The last Head of an International Organisation, which Mr. Baah-Duodu presented his credentials to was the Director-General of UNIDO, Dr. Kandeh Yumkella at the Secretariat of the Organisation in Vienna. The occasion coincided with the Organisation's 40th anniversary.

The Ambassador expressed appreciation of his Government for the assistance the Organisation was giving to Ghana to develop industrially.

The Director-General was in turn appreciative of the support UNIDO had enjoyed from the Government of Ghana over the years and expressed the hope that UNIDO - Ghana cooperation would be further strengthened when the Organisation's Country Director arrived in Ghana. He also commended the genuine attempts being made by African Governments in the area of regional cooperation in trade and technical assistance. He wished the Ambassador a fruitful duty tour. The Ambassador expressed the hope that cooperation between Ghana and UNIDO would flourish under his tenure of office.

While in Vienna, the Ambassador took the opportunity to meet with some Austrian Government officials, the country's Chambers of Commerce, the OPEC Fund for International Development as well as other Austrian senior officials dealing with Ghana-Austrian economic relations. Discussions held with the Austrian state officials focused on ways to strengthen the economic cooperation between Austria and Ghana, while those with the OPEC Fund dwelt on further assistance to Ghana.

The Ambassador met Ghanaians in Vienna and Graz during which he encouraged them to strengthen their various associations, while urging them to help plan and implement a programme for the upcoming 50th independence anniversary of Ghana in their various places. He said that both Ghanaians in Austria and Switzerland should be able to pinpoint a project or projects they have been able to support by the end of 2007.