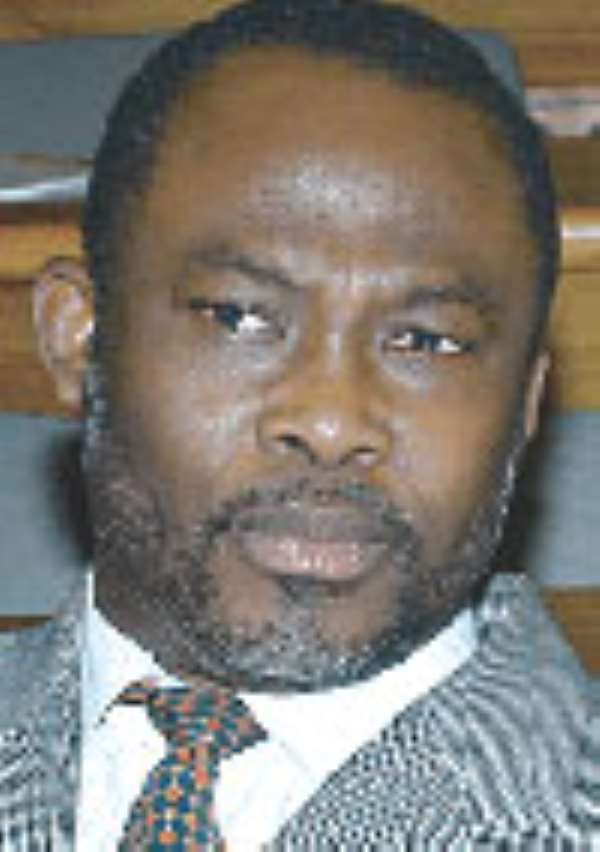 Mr. Ekwow Spio-Garbrah, who goes by the title Doctor, after being awarded an honorary Doctorate Degree by a University in the United States, and currently vying for the presidential ticket of the opposition National Democratic Congress (NDC), has been making desperate efforts to win the support of the Party's legislators.

According to him, since their main opponents in the New Patriotic Party (NPP) would not easily allow power to slip out of their hands and would fight with all they have to retain power, the NDC needs a leader who can give them a run for their money and challenge the results should the polls be rigged.

Mr. Spio Garbrah said these when he met with NDC Parliamentarians recently to campaign for their support at the party's delegates congress scheduled to take place at the University of Ghana on Thursday, December 21, 2006.

He promised that he would be able to deliver the NDC from its political doldrums and demolish the ruling party during the 2008 elections in a manner akin to how as David defeated Goliath. The aspirant said should he be given the baton to lead the party, which he was very optimistic of getting, rolled out a formula he called “44+7”, which he said he was going to use to win the 2008 general elections.

Explaining his formula to the MPs at the Kama Conference Centre, Spio Garbrah, who is presently the Chief Executive Officer of Commonwealth Telecommunications Organization (CTO) said his formula was to bring back into the fold of party, the disgruntled and aggrieved members.
“If I am given the chance, I can easily walk to 'Uncle Domestication' and ask him for his one percent votes, I go to Edward Mahama for his 3% votes, Reform for their small votes, CPP for the percentage of votes and together we get victory, I can bring them back. We lost the 2000 elections because Goosie broke away from us and others thought that it wasn't important to get them back,” he said.

The aspirant who holds a lot of qualifications and worked at various institutions including, the Agricultural Development Bank (ADB) and was one time a Minister for Education and Communications, said with him as the leader, the NDC would be out of opposition to government. Appealing to the MPs to hire him as the 'chief driver for the NDC bus', he assured the MPs of financial resources, because he had what it takes to source for funds across the length and breathe of this world.

He could not comprehend why the aspiring MPs should be given only ¢5million for their campaign activities, saying, “The NDC needs to be re-branded, rebuilt and remarketed for the total acceptability of the masses.” “I read about Prof. Mills' sickness on the net in a publication carried by the Daily Graphic. I was the only person who visited him twice at the hospital and I am surprised about what people are saying. Mills sickness was made to the world by his won campaign team,” he said.
The former ambassador to USA, who displayed the Daily Graphic publications to the MPs, said for the NDC to be in power with the MPs still in Parliament, there was the need to have a candidate who had a proven track record, a candidate who was noted to be a problem solver, someone who can identify faults and with ability to solve them, someone who was credible and attractive not only to the youth but to all sectors in the country.

Recounting roles he played in the days of the NDC, he mentioned the re-introduction of the VAT, sourcing for funds from private sector organizations to allow the then head of State, Mr. Jerry John Rawlings to travel around the US among others. Dr. Garbarh underscored that his declaration to lead the party did not encounter any hindrance from any quarters because the party wanted to deepen its internal democracy and enhance its image.

“If the NDC has been rejected, I am the one who should be able to make the party more attractive and marketable just as I did in the case of VAT,” he said, adding that he would be able to use various technicalities to knock out the NPP which he noted was not prepared to relinquish power.

Admitting that he was not in the front line of the party to protest against fuel hikes and others, he said since the NPP and NDC have beaten each other twice, with him as a substitute in the last minute he would be able to provide a goal for the NDC.

“The NDC needs somebody who is combat-ready whose eyes are red, and is very persuasive to fight elections because the NPP is not going to leave the power to the NDC on a silver platter. They are going to fight boot to boot. I am the substitute on the bench and a striker, when you give the chance, I will strike to get the winning goal,” he emphasized.

MPs also made their contributions in what was seen as a frank and candid manner.
One of the MPs, Nii Amasa Naamoale of La Dadekotopon, urged all the aspirants to stay in the party when they do not get the nod.

He said he could remember the case of Dr. Obed Yao Asamoah, who, when he met the MPs, pledged to stay with the party even if he was defeated but left the party when he was defeated. “I want to urge all of you to consider the unity of the party. You should promise us that you would not leave the party just us Obed Asamoah did. We want the party to remain united,” he said.
On his part, Hon. Lee Ocran, lamented about the resources allocated to aspiring MPs and advocated that, “If you think you don't have money don't come and disturb us.”