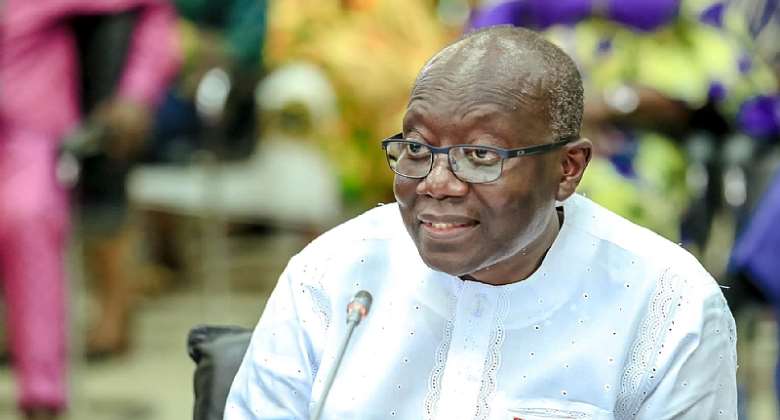 Mr Ken Ofori-Atta, the Minister of Finance, denying allegations of incompetence and mismanagement of the national economy – the grounds for his censure by the Minority Caucus in Parliament – Thursday said the motion has, however, done some good to advance Ghana's democracy.

Presenting his defence on the Floor of Parliament, during a plenary debate on the Censure Motion, Mr Ofori-Atta said he was of innocent the allegations raised by the opposition National Democratic Congress Party.

“This Censure has done some good in advancing our democracy; as we would hope that in future, such censures will have more thoroughness, will be less politically motivated,” he stated.

The seven grounds of the motion include despicable conflict of interest alleging that Mr Ofori-Atta directly benefitted from Ghana’s econonic woes as his companies received commissions and other unethical contractual advantage, particularly from Ghana’s debt overhang.

Ground Two alleged the unconstitutional withdrawal from the Consolidated Fund in blatant contravention of Article 178 of the 1992 Constitution, supposedly for the construction of the National Cathedral.

Ground Three alleged the illegal payment of oil revenues into offshore accounts in flagrant violation of Article 176 of the 1992 Constitution.

Ground Four alleged deliberate and disreporting of economic data to Parliament, whereas Ground Five alleged fiscal recklessness leading to the crash of the Ghana cedi, which at a time became the worst performing currency in the world.

Ground Six alleged alarming incompetence and frightening ineptitude resulting in the collapse of Ghana economy and an excruciating cost of living crisis; while Ground Seven accused the Minister of gross mismanagement of the Ghanaian economy, which had occasioned untold and unprecedented hardship.

Following an objection on Ground One by the Finance Minister’s lawyer that the issue of conflict of interest was beyond the purview of Parliament, the adhoc Committee, which held a public hearing on the motion, decided to refer it the plenary for consideration.

With regard to Ground Three, the Committee after hearing testimonies from the Ghana National Petroleum Corporation (GNPC) and the Public Interest and Accountability Committee (PIAC) decided there was no need for the Minister to respond to the issue and that they would submit a written report on it to the plenary.

Mr Ofori-Atta declared : “Mr Speaker, the allegations are what they say and I have really very little more to answer after all the answers that I gave at the committee meeting.

“Mr speaker, let me just remind us as we talk about the issue of recklessness, of mismanagement, of conflict of interest, and also remind ourselves of our Covid-19 experience, of our Ukraine War and, Mr Speaker, ask ourselves the lack of recklessness and mismanagement and the lack of these events, I ask my colleague (referring to Dr Cassiel Ato Baah Forson, the Ranking Member of the Finance Committee of Parliament) who used to be at the Ministry, what happened in 2015, for Ghana to run to the IMF?”

“No recklessness, no mismanagement, no COVID, no Ukraine War and Mr Speaker, President Akufo-Addo's Government had to then come and bail them out and we did so successfully.”

Sounding poetic in his narrative, interspersed with his characteristic biblical quotations, Mr Ofori-Atta stated: “… For the loud and urgent voices seemed to be prevailing and the yells and shouts of censure, censor, shall forever ring in the ears, conscience, and souls of those who signed the censure and that it would reign as crucify, crucify in their minds for no reason.

He referred to some of the unpopular decisions taken under previous political regimes, which was, nonetheless, approved by a section of the population, saying they should not have been encouraged.

“In this very country, Ghanaians voted for the Preventive Detention Acts (PDAs) by the Nkrumah regime and the Citizens Vetting Committees by the Rawlings regime….

“The Lord has given Ghanaians a spirit of courage, love and self-discipline and we must pray for the Holy Spirit to strengthen us to love all of our neighbours.”

He reiterated that 2023 Budget Statement and Economic Policy Statement of the Government presented to the House, was called the “nkabom” (unity) Budget, and that was what Ghanaians needed going forward.

Mr Godfred Yeboah Dame, the Attorney-General and Minister of Justice, in an opinion statement to the House stated that the Minister of Finance was not given the requisite opportunity to defend himself in line with Constitutional requirements.

Consequently, approving the Censure Motion would set a bad precedent.