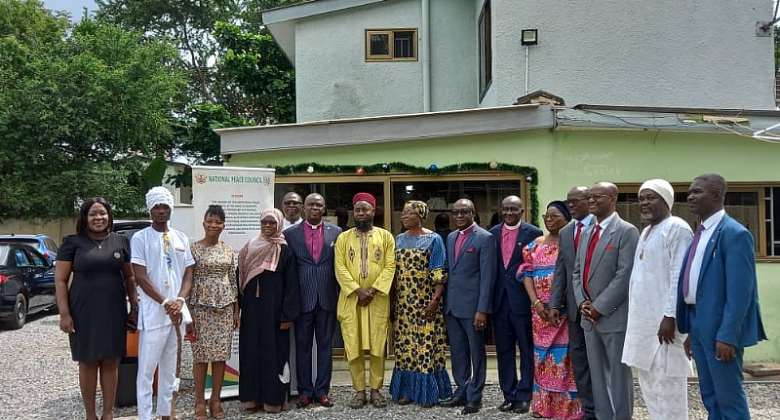 The need for peace in Ghana has never been more apparent than now when our socio-political systems seem not to respond effectively to emerging conflicts, Reverend Dr. Ernest Adu-Gyamfi, Chairman of the National Peace Council (NPC) has said.

Dr. Adu -Gyamfi noted that the youth in the country were becoming “increasingly agitated over limited opportunities available to them, whiles impunity and disregard for law and order were eating deep into the very fabric of society.

The threat of extremist tendencies is also looming large over the West African Sub-region.”

The Chairman of NPC has therefore called on the newly inaugurated Greater Accra Regional Peace Council to buckle up to meet its critical role of ensuring peace within the region.

Dr Adu-Gyamfi was inaugurating a 13 -member Greater Accra Regional Peace Council, the first of its kind, at a ceremony in Accra.

The 13-member Council has Right Rev. Samuel Kofi Osabutey, a Representative of the Christian Council of Ghana, as its Chairperson.

The Greater Accra Regional Peace Council is expected to offer advice to the Regional Coordinating Council and the Regional Security Council in relation to conflict prevention, management, resolution and building sustainable peace in the region.

It would also engage in public education and create awareness on conflict indicators within the region and make recommendation to the Regional Coordinating Council and Regional Security Council on how to improve the situation among others.

Dr Adu- Gyamfi recounted that over the years, Ghana had been seen as a relatively stable democracy and peaceful haven in an otherwise troubled region.

However, he said the country was confronted with numerous chieftaincy disputes, religious conflicts, and land and border disputes among others.

He said a Conflict Mapping Exercise carried out by the NPC in collaboration with the University of Cape Coast, showed that every region in Ghana was challenged by several and diverse conflicts.

According to him, the Greater Accra Region had not been left out in the number of conflicts spread across the country, particularly chieftaincy and land-related conflicts.

Dr. Adu-Gyamfi said, “these conflicts do not only threaten the peace of the country but also its socio-economic development, as peace and development have widely shown to be directly related.”

Dr Adu-Gyamfi explained National Architecture for Peace found the need to secure an independent and sustainable alternative mechanism aside the traditional legal as well as the existing mechanisms already in place for conflict prevention, resolution and peace-making.

He said indigenous mechanisms and processes needed to be ascertained and used alongside other models to give ownership of both process and outcome to the parties in conflict to ensure not only a successful resolution of their differences but also a sustainable resolution.

The Chairman of NPC therefore appealed to government, the business community and international bodies to continue to stand with Ghana in her noble task of peacebuilding.

“For it is only in an environment of peace that Ghana can continue to consolidate the economic gains it has chalked in recent years and improve the lives of its people.”

He also appealed to the media to be circumspect and sensitive in their reportage of actual or potential conflict situations because “information plays a very vital role in conflict management and peacebuilding.”

Right Rev. Osabutey said the Regional Council had mapped out conflict prone zones within the region adding members would work hard to “move the notch of the National Peace Council forward.”

He appealed to Opinion leaders Chiefs and Queen mothers to rally behind the Council to achieve its mandate.

India's sinking hill town, a casualty of the warming Himalay...
10 hours ago