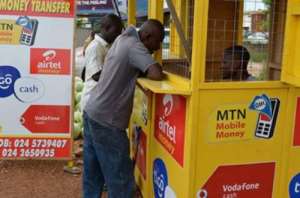 The Mobile Money (MoMo) Agents Association of Ghana is urging the Akufo-Addo's government to further reduce the Electronic Transfer Levy (E-levy) from 1% to between 0.1 to 0.5%.

The Minister of Finance, Ken Ofori-Atta, while presenting the 2023 budget and economic policy announced a reduction of the E-Levy from 1.5% to 1%.

He also added that, the policy will now be applied to all transactions effective 2023.

But the agents explain, the expected revenue target can be reached if government takes another view of the rate.

Speaking to Citi News, the General Secretary of the Association, Evans Otumfour said, Ghanaians will keep evading the levy if there is no further reduction.

“Government must conduct a research to find out why people are not patronizing MoMo. It is obvious that the rate is one of the major hindrances to government achieving its revenue. So government must reduce the rate so that a lot of people will not be impacted. There are over 17 million MoMo users, so if government pegs the rate at 0.1 or 0.5 percent, it will still meet its revenue target. If not, people will look for alternatives like the use of cash.”

Even, the Minority in Parliament has suggested a 0.5 percent Electronic Transfer Levy and a GHS300 threshold to cushion poorer Ghanaians.

Leader of the caucus, Haruna Iddrisu, said his side was open to collaborating with the government as it works to overcome the economic crisis.

“We will subject it [the new E-levy rate] to further critical and thorough discussions as a caucus in order to assist the government to get out of its eminent economic crisis,” he said.

Some mobile money users have also expressed their displeasure about the proposed changes.