Rural Banks to receive over 38 million dollars to enhance operations 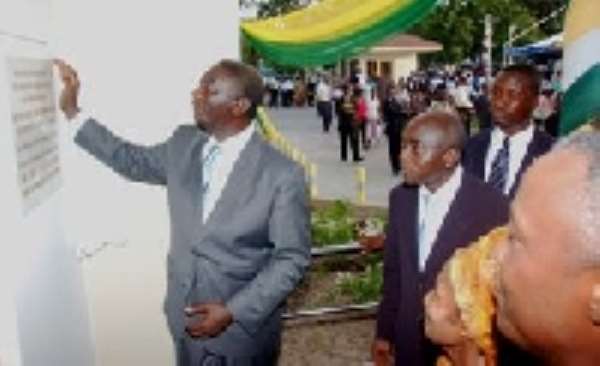 The Government has earmarked over 38 million dollars for injection into the rural banks under the Millennium Challenge Account (MCA) to help to modernize their operations and ensure quality service delivery.

President John Agyekum Kufuor announced these when he inaugurated the ARB Apex Bank's Head Office building in Accra on Thursday.

The Apex Bank was incorporated in January 2000, as a public limited liability company and commenced banking business operations on July 2, 2002. It provides requisite operational support services to the rural and community banks.

President Kufuor said the Government was determined to support the Apex Bank to develop its capacity to exercise oversight authority over the rural banks as it saw it as a vital link in all of its initiatives directed at poverty reduction and the development of the rural communities.

"Our vision for this Bank is that of providing all the vital banking and non-banking support to the rural banks to enable them to truly impact on their catchment areas to promote growth and reduce poverty at the grassroots."

He said it was no secret that most banks found it too risky to support agriculture adding that, it was in respect of this that the Government was tasking the Apex Bank to assume the lead role in providing services to the rural community generally, and small-scale farmers in particular.

"It is largely by this intervention that producers of our staple food and the non-traditional crops which are gaining in economic importance as well as new plants that are being developed for processing into bio-fuel can be cultivated economically."

President Kufuor said whereas the banks might have cause to be cautious about operating in rural areas because of difficulties of former times, there was no doubt that now conditions were changing rapidly for the better to warrant a review of their policies and attitudes.

Dr Paul Acquah, Governor of the Bank of Ghana, asked the Bank to play a pioneering role in integrating the rural banking industry into the common electronic platform and switch that the Central Bank was building as a vital pillar for an electronic payments system infrastructure.

The common platform, he said included a domestic switch with a fully integrated payments switching and settlement system for all banks.

Dr (Mrs) Gloria Nikoi, Chairman of the Board of Directors of Apex Bank, said a domestic funds product launched by the Bank in 2003 and which has been christened "Apex Link" has channelled more than 750 billion cedis into the rural economy.

Earlier in a welcoming address, Mr Emmanuel Kwapong, Managing Director of the Bank, said their mission was to improve the operational efficiency of the rural banks and to transform them into efficient and viable rural financial intermediaries, which, would address the banking needs of the communities where they operated.