Bawumia has become Ghana’s ‘Maguire’; scoring own goals and destroying fundamentals of the economy – Isaac Adongo 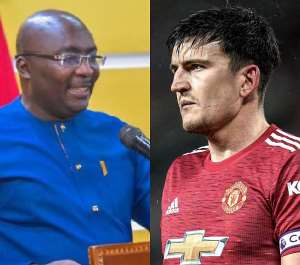 According to him, just as the English defender is a threat to his own club, Dr. Bawumia has also become a threat to Ghana.

Speaking on the floor of Parliament on Wednesday, November 30, Isaac Adongo mocked the Vice President, saying he has become an ‘Economic Maguire'.

“Mr. Speaker I’m not surprised. If you are a fan of football and I’m happy to see you the other day jubilating when Ghana won. There was a player in the United Kingdom, in England, called Maguire who was playing for Manchester United. Harry Maguire, he is a defender. He was tackling everybody and throwing his body everywhere and he was seen as the best defender in the world. Manchester United went and bought him. He became the biggest threat in Manchester United's defense, tackling Manchester players and giving assists to opponents.

“Mr. Speaker when even the opponents failed to score Maguire will score for them. Mr. Speaker, you remember in this country we also have an economic Maguire. This economic Maguire was going to the Malata market and they were clapping that this man is the best in managing foreign currency. The same economic Maguire was roaming at Central University delivering lectures on how to restore the value of the cedi.

“Mr. Speaker when we gave this Maguire the opportunity to be at the centre of our economy he became the risk of our own goal,” the Bolgatanga Central MP said.

Isaac Adongo added, “Dr. Bawumia our economic Maguire is now tackling all the fundamentals of our economy and destroying all of them. When he said that he was the best in calculating inflation he moved us to 40.4. The biggest fear now is that we may be paying appearing fees for this Maguire to now score ‘an overhead kick’ against Ghana.”

According to Isaac Adongo, the Vice President has been the main cause of the country’s woes leading to the current economic crisis.

Listen to the Bolga Central MP from the attachment below: