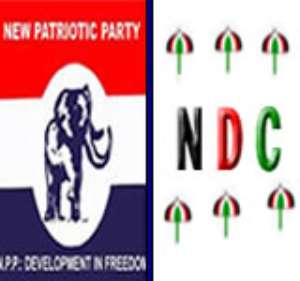 The two major political parties have finally found common ground, but as one observer noted from far away America, just not the kind the people might have envisioned. The leadership of both the New Patriotic Party and the National Democratic Congress have managed to make the public, including The Statesman, disenchanted with the development of Ghana's partisan politics.

By the look of things, the Ghanaian voter is about to be subjected to the most negative political campaigns in 2008. December 2008 general elections are being seen by many politicians and their supporters as a do-or-die affair. For the NPP, the fear is that a defeat would mean the dangerously bitter former AFRC/PNDC/NDC leader Rawlings carrying out his threat of throwing NPP officials in jail. For the NDC, the fear is that a defeat would break their party's back, both financially and morally, and that it could become even more difficult to win back the Castle for the foreseeable future.

We're already getting an early sample of the 2008 electoral trepidation. The Statesman, as could be deduced from our Thursday publication, is becoming extremely frustrated at the direction our political leaders are actively or inadvertently pushing our politics.

Our bold, controversial banner headline comment yesterday - 'The Political Circus Goes On' – has provoked a lot of response from our readers, including some leading politicians, who believe that we were too harsh on the current government, especially on the President.

We do not intend to argue against any such observation because what we sought to do was to get our political leaders from all sides to pull the brakes and search within themselves whether or not they are happy with the development of Ghana's partisan politics, at least as dominated by the only two parties that have shared the first four terms under the Fourth Republic.

We fear that the slavishly and rigidly partisan compartmentalisation of every issue of national interest devalues our ability as a nation to give the appropriate qualitative treatment to such vital matters. It is this that makes politicians put defence of party before interest of nation. It is that which makes politicians refuse to properly evaluate issues. It is that which makes the press and commentators sympathetic to one party or the other, reluctant to point out some painful truths for fear that they would be giving their opponents ammunition to sling back at them.

But, we must begin to grow. We must begin to move away from seeing the need to take a defensive or offensive approach to any matter that comes up. It is a fact that homelessness is growing, for example. It is a fact that corruption remains pervasive. But, a ruling party does not have to always approach such problems defensively. We cannot continue to devalue our politics.

For instance, there are those in the New Patriotic Party who believe that former President Rawlings should be very much ignored, with Government focusing on the issues. But, there are also others who believe he should be matched boom for boom. We believe the choice in the final analysis determines how much we desire as a nation to move on and with acceleration.

We are calling on Ghanaians to take a hose and cleanse Ghana's necessary partisan politics.

Partisan politics is getting out of control even though it is the name of the game. It is becoming detrimental to the common good. But that is because of the way we play it here in Ghana. We risk it turning more and more Ghanaians away from the political process. It is risking the unity of our development focus. Partisan politics must be regarded as a spectator sport. It may be the essence of multiparty democracy but it is largely responsible for the ridiculous statements that politicians sometimes make. Yet, it is not inherently evil. Under normal circumstances, it is an important part of governing in a democratic society, so let us not make the electorate think that it has been a grave mistake. We should not allow it to pollute our most important social, economic, political, legal and ethical processes.

In April 2004, the Supreme Court of India warned political parties there that it would consider making slanderous advertisements in the electronic media an electoral offence. A three-judge bench deplored the political mudslinging during election time and gave the Eastern country's Election Commission three days to frame broad guidelines to curb it.

"If there is political mudslinging, we will make it an electoral offence under the Representation of People's Act," said the bench. It has serious ramifications because anybody found guilty of committing an electoral offence will be disqualified even after getting elected, the court added.

EC counsel K. K. Venugopal sought time till Thursday to work out a broad guideline in view of the huge task before the Commission. He said there were 83 private channels, 33,000 cable operators, six national parties, 15 regional parties and 702 registered political parties.

In his new book, Faith and Politics, former Missouri Republican senator John Danforth outlines a problem he sees with his country's politics, which aptly describes our situation - except of course such a situation is even worse for our development because ours is a country that is struggling for direction, especially out of whole scale poverty, and in such situations political decisions and actions mean more to people's lives than in countries with well-defined, established and confident institutions. He writes: "Many [people] believe that something has gone terribly wrong with our politics."

And here's what's key: Danforth writes, "they do not believe that either political party speaks for them, and they are offended by the relentless nastiness of what they see on television and hear during election years."

The use of a barrage of insults and defamatory words to bury one's opponent, rather than engage in civilized discussion and debate, must be addressed. The media, including The Statesman, should not act as unconscious conveyer belts for such political banter. Our politics require a new collectively conscious sense of realism, while purging it of the sub-culture of hate, narrow-mindedness and a constant defend and offend posture on all issues.

The Oxford English Dictionary defines mudslinging as: "The exchange of insults or abuse; specifically, the use of criticisms and accusations, especially unjust ones, to damage the reputation of an opponent."

We are told the metaphorical idea of slinging mud (slander, malicious gossip, defamation, insinuation, etc) goes back at least to the 17th century when "scurrilous sorts were said to 'cast,' 'fling' or 'throw dirt.'" And, although the practice of political 'mudslinging' or 'mudthrowing' was raised to an art form in the Jackson/Adams campaign of 1828, in America they did not allow it to get in their overriding pursuit of building the 'greatest' nation on earth. Sadly, we don't seem to have taken note of that aspect as well, in our embrace of mudslinging.