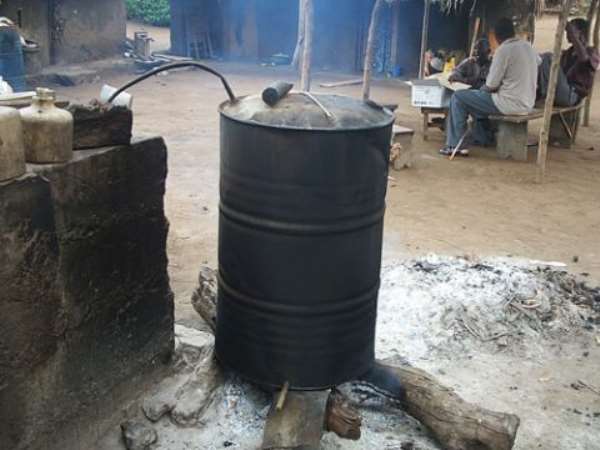 THE CO-OPERATIVE Distillers and Retailers Association (CDRA), has threatened to cease supplying Akpeteshie (local dry gin) to Pharmacists and Doctors for daring to speak against the production and consumption of the drink.

The Association has also given the hint that it may consider legal action against any person or group of persons who downplayed the importance of the drink.

The Sunyani Municipal Manager of CDRA, Mr. Titus Gyarko Kwadwo gave the warning in an interview with The Chronicle after the Association's 5th Annual General meeting in Sunyani, under the theme: “Make a mark: the power of truth or lies”.

Mr. Gyarko Kwadwo said, “We have been supplying Akpeteshie to Pharmacists for drug production purposes and we do not understand why medical practitioners should gather the courage to wage war against the production and consumption of the local drink”

He further said the Association was considering initiating legal action against any one who publicly condemns the drink, especially Pastors.

“Pastors are cautioned against spreading lies about the drink. If they do not put an end to their attacks on Akpeteshie, we may have no other option than asking the law to deal with them.

However, Mr. Gyarko Kwadwo urged patrons of the local gin to drink responsibly, because “Akpeteshie is a royal drink, which needs to be accorded the necessary respect, “We must not forget that it is a made in Ghana product as well”, he added.

He again hinted that CDRA was to enter into packaging the Akpeteshie in sachet to make it more marketable and portable.

When asked whether an approval had been sought from the Ghana Standards Board and the Food and Drugs Board prior to the packaging of the drink, the Municipal Manager explained that the Association was not under the authorities of the two agencies, because CDRA has been authorized to test their own products under no one's supervision.

Mr. Gyarko Kwadwo pointed out that 95% of the product was sold on credit to retailers with repayment being a major problem.

He added that managers and committee allowances were not sufficient and due to that they are reluctant to devote their time to help while some managers do not issue receipts to distillers.” We are not going to sell on credit again”, he said.

Mr. Gyarko Kwadwo noted that the Association has been contributing to the national development, saying, an amount of ¢30,849,850.00 was paid as taxes to the government.

“We have also been honouring our social responsibilities by assisting the needy in the society”, he said.

The Union, during the congress, presented ten mattresses to the Compassion is Love orphanage at Yawhimakrom and 500,000 cedis to three disabled brothers at Sunyani area 2.

The General Manager of the Credit Union Association, Mr. Emmanuel Oduro Darko urged members of CDRA to cultivate the habit of saving in order to acquire loans and other financial services to improve their standard of living.