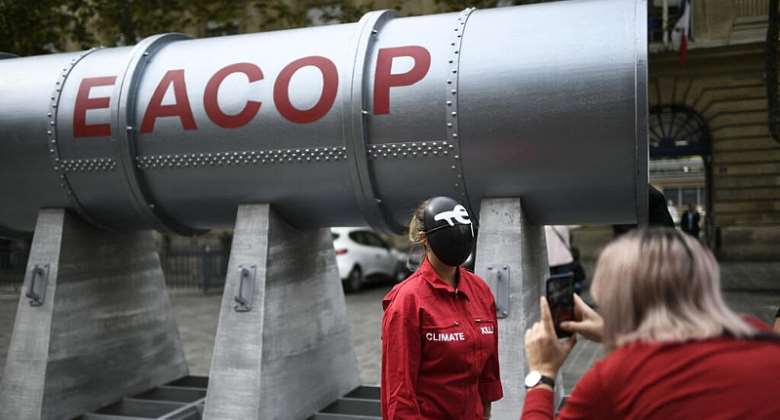 Currently under construction, the EACOP pipeline will transport oil hundreds of kilometres from Uganda to a port in Tanzania.

The US-based Climate Accountability Institute (CAI) has warned EACOP will emit 379 million tonnes of carbon over its 25-year lifespan – a so-called "mid-sized carbon bomb" that exceeds France's own national estimates for 2020.

This is far greater than estimates given by pipeline builders in their environmental impact report, signed off by both Uganda and Tanzania, which CIA said accounted for a mere 1.8 percent of the project's emissions.

This is because the report, among other things, did not take into account "downstream" emissions such as transporting oil from the pipeline to global markets.

CAI carbon analyst Richard Heede said emissions estimates needed to include the "far larger supply chain emissions (98.2 percent) from maritime transport of crude oil to European and Chinese refineries" along with emissions from refining the oil and "the emissions from the fuels being used as intended by consumers".

The pipeline will transport oil from Murchison Falls National Park on Lake Albert in Uganda to Tanzania's Port Tanga, 1,400 kilometres away. Tankers will transport the crude from Tanga to the ports of Shanghai, China, and Rotterdam, in the Netherlands.

"It is time for TotalEnergies to abandon the monstrous East African Crude Oil Pipeline that promises to deliver oil we don't need," CAI wrote, adding that the project runs counter to what TotalEnergies says in public about reducing carbon emissions.

A number of climate, biodiversity and human rights groups have united to call on Uganda and Tanzania to stop the EACOP, which they say will ruin lives as well as contaminate the environment.

CAI had filed an affidavit with the East African Court of Justice with East African and other international non-governmental organisations to support an injunction, which was temporarily halted in March.

According to the group STOP EACOP, the pipeline will run through the basin of Lake Victoria, Africa's largest lake, which provides water and livelihoods for 40 million people and their farms.

And the area is an active seismic zone with regular earthquake activity.

“Just one spill or leak could have absolutely catastrophic effects on these vital freshwater sources and the millions of people that depend on them,” said the group.

In addition, the group says that TotalEnergies and its partners are using the lowest cost, open cut trenching option for nearly all the water crossings, which is not up to industry best practices.