Ghana is being sacrificed for a family 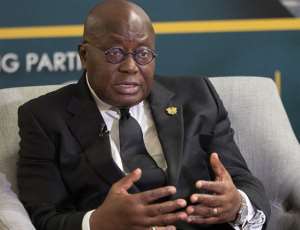 The only minister, who happens to be a family member (cousin) of the President, and he’s being asked to resign or be sacked is the Finance Minister, Hon. Ken. Ofori-Atta. With this description, why do you think Ken is still at post?

Ken Ofori-Atta is still at post because the President is sacrificing the country for his family. Right now the President, who promised Ghanaians that he will not operate a family and friends government is now putting his family ahead of the needs of Ghanaians

People and groups including both the NPP and NDC Parliamentarians, the NDC, former President John Mahama, AFAG, Citizen Coalition and many others have called on the President to sack the Finance Minister if he will not resign.

Just yesterday when the President rattled to Ghanaians, he told us the IMF negotiations may end at the end of this year. That is the earliest.

So right now, what time frame should the Ghanaians allow Ken Ofori-Atta to stay on? In three weeks from October 24 or till the end of this year?

Ladies and gentlemen, Ken Ofori Atta is battling removal from his post within his own party and facing censorship from the NDC parliamentarians, so how effective can he be at the negotiation table? Is Ken Ofori-Atta all the men the NPP and Nana Addo have to run the Finance Ministry? Or is it because Nana Akufo-Addo and Ken Ofori-Atta have so much baggage they don’t want Ghanaians to know? Shouldn’t that be one of the main reasons why you should vote these people out, so you will know how much they stole from you?

Nana Addo, who told the NPP MPS to allow Ken to stay on for three weeks, is now saying Ken will stay till the end of this year. He is also telling you that there will be no haircut to your investment during the IMF negotiations. Do you believe what he is saying now? The annoying thing is that the person who told us Ghana is not going to the IMF, is the same person leading Ghana in the IMF negotiations. So what comes into your mind if he advises the President that there will no haircut at the negotiating table?

There is a censorship bill against Ken Ofori-Atta in parliament but as usual, by the time the bill matures, Ghanaians may forget the harm Ken and Nana Addo would have caused Ghanaian and people will begin to plead on his behalf. The censorship bill too will not get anywhere and Ghana will be the same, with Ken Ofori-Atta, as our Finance Minister.

This write-up is to let you know that Nana Addo is sacrificing Ghana for his family, so apart from the appeal from the 95 NPP MPS, the censure bill by the NDC MPS, Ghanaians should force the President to sack Ken Ofori-Atta now, just as they forced him to admit yesterday that truly, Ghana is in crisis. But does Nana Addo know who caused the crisis?