Ismail Dauda: How to be a police officer! 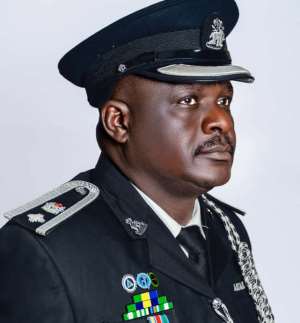 The value a society places on the philosophy of service to the nation no doubt influences an individual’s decision to work for his or her fatherland. The first prime instinct of man and necessity for human survival is that man works to earn a living and be able to feed himself and his family. The type of job, prestige and benefits attached to it are of secondary consideration. But, when it extends to the consciousness of the fact that one is serving one’s country, service then becomes a thing of noble and national pride. Of course, the first set of people imbued with this consciousness are members of the Armed Forces, and others in that category.

Understandably, the Armed Forces depict the defence and security of the nation. To them - and, rightly so - since their service to their country is to defend its existence and survival, they quickly align their philosophy or thinking with preserving its integrity and unity. That being an infectious thing really, how one now serves conscientiously matters. In other words, how to serve worthily as an enforcer of the law is never to lose sight of the central ingredients of the State, because, again, the existence of the State is to ensure that lives and property of its citizens are protected. To do this, any threats or inhibitions within and outside the country must be exterminated. Men and women who carry this burden of ensuring the security and safety of the country deserve to be celebrated; and sincere gratitude shown to them on account of their choice.

A time like this reminds one of Ismail Dauda, Chief Superintendent of Police (CSO) and, currently, the Chief Security Officer (CSO) to Governor Adegboyega Oyetola of Osun State. From discreet investigations, CSP Dauda will be retiring from active service on November 1, 2022, after 35 years of meritorious service.

As it is with other professions, there are ups and downs, occupational hazards and tempting options in the Force. For our man, despite the level of corruption and social misgivings in the country, his career accomplishments have again shown that uprightness and dedication to service still pay.

CSP Dauda was born on born on March 3, 1968 in Sokoto, to the family of Dauda and Aishat Alabi of ‘Ile Gbangudu’, in Ogbomoso, Oyo State. His father was a police officer while his mother was a trader. Raised in Kaduna, Kaduna State, the young Ismail attended Army Children School, Dalet Barracks, Kaduna, from 1976 to 1981. Between 1981 and 1983, he attended Government Secondary School, Kurmin Mashi, NDA, Kaduna, before proceeding to Community High School, Akata, Ogbomoso.

During his 35-year-long service in the Force, Ismail Dauda, aka ‘Oscar’ held several Administrative and Command positions, notably: Member of the 21 Squadron Robot Rescue Squad (2000); Personal Assistant to Commissioner of Police, Federal Operations (2000); Inspector-in-Charge of Security at the Israeli Embassy in Nigeria (2001-2005); and Administrative Officer, Diplomatic Protection Unit, 44 PMF (2005-2007). Others include: ADC to the Speaker, House of Representatives (2008-2011); Administrative Officer, Presidential Escort, 24 PMF, State House Villa, Abuja (2012-2015); Unit Commander, 24 PMF Annex, Dodan Barracks (2015-2016); and OC Patrol and Guard Officer, Kano State Command (2016–2018), before his present appointment, in 2018. During the UN Mission in Croatia, he served as its Chief Investigation Officer in the Baranja Eastern Slavonia Sector.

The senior cop has many awards to his credit: ‘United Nations Medal for Peace Keeping in Croatia’ (1997); ‘Embassy of Israel Commendation Letter for Good and Effective Management of the Embassy’s Security’ (2005); and ‘Chevron Commendation for the Provision of Effective Security at EGTL, Escravous, Delta State’ (2006). On December 22, 2021, he got the ‘Commissioner of Police Commendation and Award for Outstanding Performance as CSO to the Governor of Osun State’.

A sports and culture enthusiast, CSP Dauda is a member of the Nigeria Football Coaches Association, Osun State Branch; International Institute of Professional Security (IIPS); and Nigeria Army Resource Centre. He is also the founder of Area 3 All Stars Football Club, Abuja. He holds the title of ‘Ararinse Adini’ of Almojidu Salam Mosque, Irabiji in Osun State.

The retiring officer has a BSc in Criminology and Security Studies and an MSc in Peace and Conflict Resolution from the National Open University of Nigeria (NOUN). He is happily married to Bilkisu, also a police officer. Their union is blessed with 6 children.

From the courses he attended and the postings where he served, that CSP Dauda was a thoroughbred officer was never in doubt. So, one can only hope that government would, with unreserved praise, find means of putting to effective use the wealth of experience and expertise of retired officers who, actually, are not tired. With the security challenges currently devastating the country, the service of seasoned officers like the Ismail Daudas of the NPF should not be lost to mere protocol of retirement!

Back in the Force, there are certain responsibilities and privileges assigned to diverse positions held. Besides, to be retiring successfully is no mean feat at all! The superior officers are watching while the junior ones are not dead to the world either. Being in-between, the demand to be disciplined is also very high. Therefore, one cannot afford to dither or lose sight of the essence of one’s mission. That CSP Dauda has been able to strike a balance between the subordinates on the one side, and the superordinate on the other, means that he has persevered. Is it any wonder that he did not misbehave while working with the political class?

Well, while one is not in doubt that the Police Force will accord CSP Dauda the extant retirement package painlessly, having also served in the State House should attract something. It therefore behoves the government to reward him handsomely for being dedicated to duty, and for his unselfish deeds. This will serve as an encouragement to others who will still serve in that position. It’s also one sure way to prevent desperation. Let’s be realistic, the security demands of the State House are enormous, the least of them being members of the opposition political parties, restive civil service personnel and the ‘we-no-go-gree’ gangs.

According to Robert Byrne, “the purpose of life is a life of purpose.” Yes, ‘Oscar’ is certainly not a rich man, but he remains a man of integrity. He stands out as a chivalrous and truthful officer who got to this stage purely on merit and professional competence. Evidently, this good man will be bequeathing an unblemished professional career to those who are coming behind. One can only wish him the best!