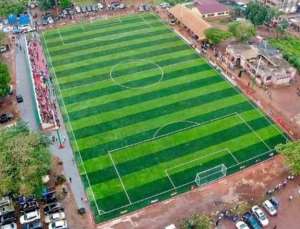 Kwasi Adu-Gyan, the Bono East Regional Minister, has paid a three-day working visit to districts within the eastern corridor of the region.

The visit, which is a prelude to President Akufo-Addo’s tour of the Bono East region later this month, took the minister to places such as Yeji, Prang, Atebubu, Amantin and Abease.

Mr. Adu-Gyan paid courtesy calls on the various traditional leaders of the towns after which he held meetings with heads and representatives of decentralized departments and agencies.

Key on the minister’s itinerary was the inspection of infrastructural projects being undertaken by the government in the areas visited.

Some of the projects visited included the multi-million-dollar water project for Yeji and its environs, which is about 95% complete. Still at Yeji, the minister also inspected the newly completed astro turf as well as the PRODESHOP project, which is into aquaculture development.

At Prang, the Minister inspected road projects in the area: the construction of a new district hospital under the government’s agenda 111 project, water project and hostel facility for Abease Community Day SHS, a One-District, One-Factory project in the town.

The chiefs of the area made a passionate appeal to the minister for the construction of the Prang–Kintampo highway to open up the area and boost economic activities.

When the minister and his entourage also toured the newly completed Court Complex, the regional directorate of the Ministry of Food and Agriculture and a Cassava factory completed under 1D1F and due for official inauguration later this month.

The projects include the completion of the Court Complex, Regional Agric directorate, and the 1D1F Cassava Factory which are all ready for commissioning by ending of this month.