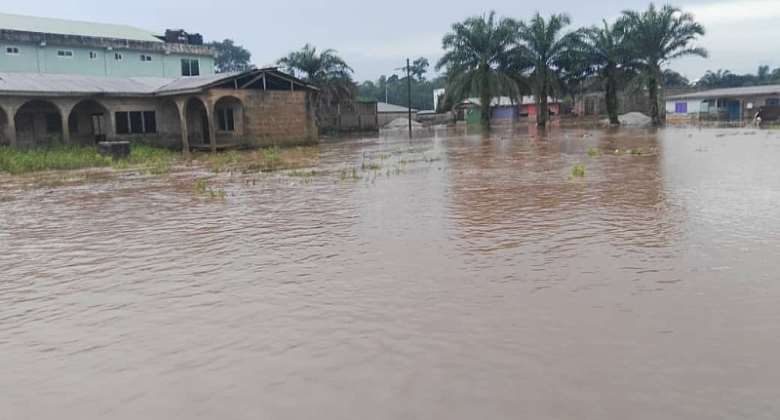 Some houses in five communities in the Techiman South Municipality of Bono East Region have been submerged, resulting in the displacement of some residents and inaccessible roads.

The Tano River, which is not far away from the communities, annually overflowed its banks, leaving residents stranded and unable to undertake their daily socio-economic activities.

“The waters drained into our rooms to destroy our properties whenever the river become flooded during the rainy season. We need urgent attention from stakeholders, including the Member of Parliament and the Assembly to desilt the river as sand and other solid objects have choked and silted the river”, the residents said.

Some inner roads linking the communities are occasionally flooded during rains, posing danger to residents, especially workers and traders, who use the roads daily.

Speaking in an interview with the Ghana News Agency (GNA) at Anyinabrem, Mr Kasim Abdul Karim, the Assemblyman for the electoral area, expressed worry about the devastating situation and described it as “threat to life and a nightmare whenever the rains set in”.

Mr Karim said before the flooding, two school children who tried to pass through a flooded road leading to their homes nearly lost their lives and had to be rescued.

In an interview with the GNA, Mr Kwame Mohammed, the Techiman Municipal Human Resource Director of the National Disaster Management Organization (NADMO), said the organisation had taken steps to address the flooding problems and related challenges, but needed the cooperation of the people to effectively address the situation.

Mr Mohammed said as part of effort to address flooding in the Municipality, the organisation in collaboration with the Municipal Assembly, had earmarked about five flood-prone areas, comprising Anyinabrem, New Onyinasi, Twimia-Kuase, Twimia-Nkwanta and Nana Abena Market to improve the drainage systems to avert the reoccurring of floods.

Mr Mohammed said the Municipal office of the organisation had formed disaster prevention volunteer groups to monitor and report to the office individuals and groups engaging in activities likely to cause disasters while zonal officers were also on the ground providing education to the people on the need to stay away from disaster-prone areas.