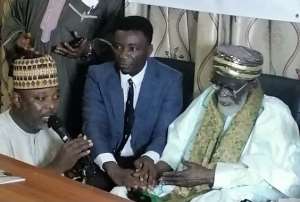 Professor Nana Oppong, President of the Distinguished Scholars of Africa, together with the National Chief Imam, His Eminence Sheikh Osman Nuhu Sharubutu, has unveiled the Quranic key to better economic development.

These strategies entailed in the book titled "The Quranic Formula for World Economic Development", according to Prof. Oppong, if adopted by all people, will provide well-structured and functioning personal and national economic growth.

At a programme themed "the Quranic economic dialogue" held at the main hall of the Council for Scientific and Industrial Research in Accra on Thursday, October 6, in the gracious presence of the National Chief Imam and other Islamic leaders, the new book was launched.

Speaking about the essence of the book, the celebrated scholar explained that the almighty Allah revealed to Muslims the effective and credible ways to attain good living in life, which can be adopted by people from all walks of life for collective success and a chaos-free economy.

Speaking further, he revealed that the Quran is very particular about education, not just any form of education but one that inculcates in the individual the ability to know good, do good, and, in the end, enjoy the good he/she extended to society as the way to proper economic growth.

According to the author, "It is also to address the problems of the Muslim community, the country, as well as the African continent at large.

"This book has all the solutions to such problems and will educate citizens to appreciate the fact that economic growth is never supposed to be left to the government alone but to be achieved individually before it extends to the national borders."

According to Nana Oppong, practical education will be the best way to achieve the desired economic success, as he claims among the two types of logic (abstract logic, which is just theory-based and do logic, which is putting proposed policies into action), leaders and every citizen need to work closely using the ability to think and be able to put it into action to benefit society and their own personal growth.

On the fifth page of the book, the author highlighted seven pillars to build a foundation for a good economy devoid of the economic challenges the world is facing now. The strategies termed the "7 Cs of economic building" are: creativity, cooperation, competition, control, compensation, consumption, and continuity.

With reference to the sixth page, which throws light on the principles, the author explains in summary that "the economic person must be creative and competitive to produce useful or new good things. He must work with others and produce goods or services that previously did not exist, either in a certain quality or quantity. The economic man must also be a consumer and his products must be consumed by others for human needs to be fulfilled. "

Also speaking on behalf of the National Chief, the Deputy National Imam, Sheikh Awal, intimated that Islamic children must be thought in the original language of the Qur'an, which has no translations for them to acquire the real language of Allah as enshrined in the untranslated Arabic Quran.

Throwing light on the Imam’s assertion, the official attorney for the National Chief Imam, lawyer Seidu Nasigri, explained that as much as it is of utmost importance to learn the real language of the Qur'an, he believes aspiring Islamic scholars should be the target for such initiatives.

The guests were made to share their opinions and ask questions about the goals of the program, which they affirmed and subscribed to the idea of adopting a practical-based education to build the economy.

Concluding on the deliberations of the book, Prof. Oppong suggested that Ghana’s educational system be changed to one that will not only produce policy composers but implementers as well, to help relieve the country of its economic challenges.