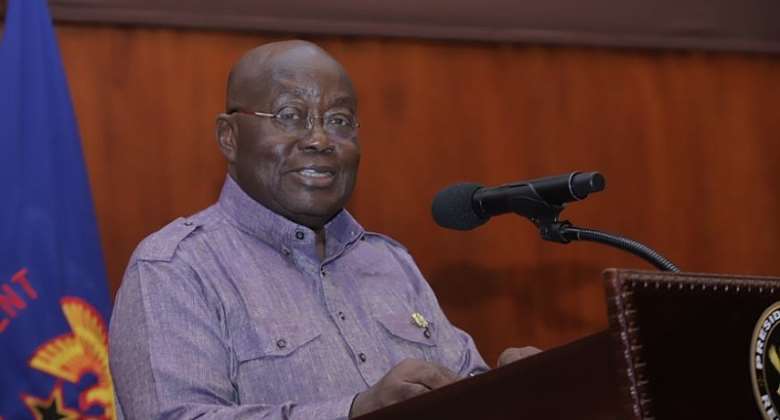 President Nana Addo Dankwa Akufo-Addo has lauded the Ghanaian Muslim community for its decision to come together and advance the cause of the members and society in general.

The development, he said, was worth emulating by the other religious bodies, especially the resolve of the various sects (Al-Sunna, Tijaniyya, Shia, Ahmadiyya and the Ghana Muslim Mission) to bury their differences and establish a common front to spearhead the welfare of the people.

“It will make for unity, harmony and the peace of our country,” President Nana Akufo-Addo noted, when the leadership of the National Muslim Conference paid a courtesy call on him at the Jubilee House, Accra.

The delegation was led by the National Chief Imam, Sheikh Dr Osmanu Nuhu Sharabutu, who chairs the Conference.

The conference's terms of reference include providing a common platform for the Muslim community to deliberate on issues of common interests, particularly in the area of education, health, finance and the general wellbeing of the people.

It is mandated to serve as a mouthpiece to engage the government and other bodies on matters relating to the community's advancement and represent Muslims in the process of formulating and implementing national policies.

The Conference is expected to work towards the establishment of the Ghana Islamic Education Service, Ghana Islamic Health Service and Ghana Islamic Financial Service – all intended to cater for the needs of the people.

President Nana Akufo-Addo welcomed the unity of purpose existing among Muslims, saying the government acknowledged the critical role they played in achieving the nation's development aspirations.

On the issue of the state giving formal recognition to the conference, the President assured: “The demand for recognition will be positive,”

President Nana Akufo-Addo singled out for praise, the National Chief Imam, Sheikh Dr Osmanu Nuhu Sharabutu, for his exemplary leadership and commitment to the cause of humanity.

“He has been a pillar of harmony of peace and reconciliation of our country,” he observed, citing the significant role the National Chief Imam had played over the years in uniting the Muslim community.

The nation, he said, was blessed to have such a man who continued to demonstrate a high sense of selflessness and patriotism in the development aspirations of the nation.

President Nana Akufo-Addo indicated that his Administration valued the contributions of Muslims to society's progress, therefore, the authorities were determined to sustain the existing relationship between the government and that community for the benefit of the people.

The setting up of the Zongo Development Fund and other human-centred programmes, he said, were all geared towards making life comfortable for the Muslim community.

Alhaji Inusah Mohammed, Acting General-Secretary of the conference, said the body had representatives of all the various Muslim sects in the country.

According to him, their focus was to present a common front in deliberating on national policies and legislations that affected the people's welfare.

Maulvi Mohammed Bin Salih, the Ameer of the Ahmadiyya Muslim Mission and Member of the Conference's Governing Board, said the coming into being of the Conference was timely given the fact that Muslims had since the pre-colonial era been instrumental in changing the society for the better.

Structure of government's debt restructuring plan is unaccep...
41 minutes ago

Cocoa farmer killed by fallen tree at Mankranso
57 minutes ago