Woman King is worth watching: but be aware that its take on history is problematic

By Dominique Somda - The Conversation
Article 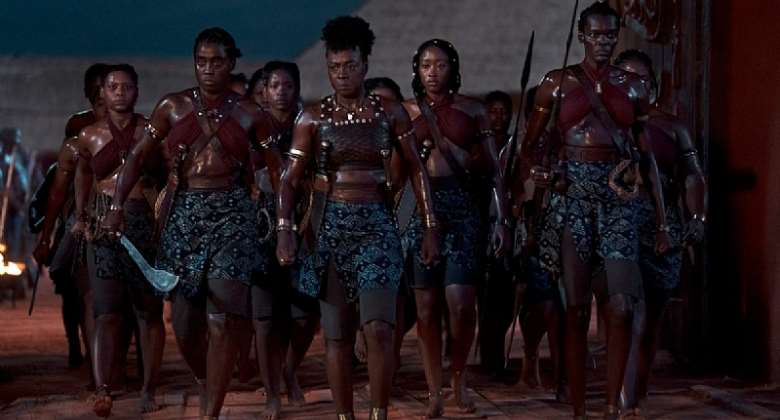 The Hollywood movie The Woman King , released in mid-September, became an immediate box-office success . The triumphs of the Agoodjies , the women warriors of the ancient Kingdom of Dahomey in today's Benin, west Africa, are as magnificent as the public had anticipated . In this epic historical drama, African women take centre stage.

Abomey (the kingdom's capital) and Ouidah (the main port under its control) are shown from the perspective of Nawi, a novice in the all-female regiment. She opposes the enduring injustice of gender expectations, espouses the camaraderie of her sisters in arms and faces the brutality of slave traders. The humanity of the Dahomey women is superbly portrayed.

But the film has drawn controversy from many angles.

The US far right has condemned it for depicting black women murdering white men . The hasthag #BoycottWomanKing has also trended on social media among black users.

The film in fact attracted racist rhetoric even before it was released. Online commentators condemned the perceived savagery of the Dahomey kingdom. In those reports, particular attention was given to the “annual customs” in Dahomey, the palace rituals that sometimes included massive human sacrifices.

Criticism has also been levelled at the film from people presenting themselves as “ ADOS ” (American descendants of slavery). They have called for it to be boycotted because it glorifies an African kingdom that brutalised their ancestors.

Read more: The Woman King is more than an action movie – it shines a light on the women warriors of Benin

Disapproving notes have also come from specialists of 19th-century Dahomey history who have publicly shared their concerns about the misrepresentation of the slave trade in the film.

Finally, a recurring argument is that the Kingdom of Dahomey, with its many flaws and crimes, was not worthy of representation. Some social media users, calling for more representations of positive black stories, have also questioned the choice of Dahomey. One Reddit user asked a question that has echoed online in various forms: “Why the hell would you make a movie about Dahomey when you have Toussaint?”.

Toussaint Louverture is the hero of the Haitian revolution – and, coincidentally, the son of a woman enslaved during wars waged by the Kingdom of Dahomey.

As an anthropologist who has studied the legacies of slavery in Africa and who grew up in Benin, I argue that our approaches to internal slaveries or African participation in the slave trades must not be minimised. Their existence should also not serve the dehumanisation of Africans or justify the erasures of their complex histories.

My criticism of the movie is related to the misuse of fiction. Film making often involves the liberal creation of plot points and characters arcs. But is there a limit to our our right to alter history?

African histories are not inconsequential; they don't deserve simple reinventions. Africans have a right to demand fair and layered representations.

The film resorts to considerable distortions. The trajectory of King Guézo (1818-1959) of Dahomey seems particularly contentious. Historian Ana Lucia Araujo alerts us to his role in continuing his engagement with the transatlantic slave trade – abolished in 1807 by the British but eradicated only decades later. The last documented transatlantic slave voyage occurred in 1866.

By contrast, King Guézo in the film (handsomely interpreted by John Boyega) affirms his commitment to ending the slave trade despite the greed of Brazilian merchants and the rival Oyo kingdom (an important neighbouring kingdom and a leading participant in the slave trade in the Bight of Benin).

The film seems to rely on a central dichotomy to lay out moral and political ambiguities: it pits the “evil” Oyo kingdom against the “innocent” Dahomey kingdom.

In the US, implicating African kingdoms such as Dahomey in the context of the proliferation of revisionist curriculums – for instance, that propose to teach the slave trade as a simple relocation of people – can be daunting.

Far too often, the recognition of the role of African political entities in the transatlantic slave trade (the women warriors of Dahomey were tasked with capturing fellow Africans to be sold into slavery) is interpreted as a permission to absolve Euro-Americans of their responsibilities as enslavers of Africans.

The price of entertainment

Asked to react to the controversies around the film, US actress Viola Davis, who stars in the movie, explains :

We entered the story where the kingdom was in flux, at a crossroads. They were looking for a way to keep their civilization and kingdom alive. It wasn't until the late 1800s that they were decimated. Most of the story is fictionalised. It has to be.

Julius Tennon, a producer on the movie and Davis' husband, adds in the same interview:

It's history, but we have to take license. We have to entertain people.

The film could be praised as an alternate history, belonging to a genre of fiction where actual historical events receive different endings. Popular movies, series, and novels have used this type of narration. The resolution can provide consolation, a sense of hypothetical retaliation, or conversely cause utmost terror.

For example, in Tarantino's Inglourious Basterds , Hitler and Goebbels are shot by a Jewish-American commando. In the TV show Watchmen , Charles Lindbergh, the real-life aviation pioneer, becomes the US president and implements fascist and antisemitic policies.

Whether dystopian or utopian, alternate histories can work when they transform notorious events and disrupt known historical orders – narratives so familiar that they surprise, but without instilling any doubt in the minds of their audience.

With this genre, fiction reveals itself as fiction because of the magnitude of the changes it imposes.

In the case of The Woman King, however, it is fair to assume that the history of Dahomey is relatively unknown to a large part of its global audience.

Anthropologist Nigel Eltringham, in the book Framing Africa , reminds us of the distinction between “true inventions” of fiction – those which may remain intentionally truthful – and the falsifications that distort histories beyond repair and recognition when they, for instance, remove the blame for actual crimes committed by historical figures.

Falsifications may undoubtedly undermine our sense of justice and trust in history. A group of US-based historians, Ana Lucia Araujo, Vanessa Holden, Jessica Marie Johnson, and Alex Gil, have assembled an extensive and impressive online document, The Woman King Syllabus , for viewers interested in “the history beyond the fiction”.

Should one watch it?

The Woman King should be seen. For its spectacular celebration of the Agoodjies' strength and its invitation to explore their meaningful, public and intimate lives. And also for – rather than despite – the political and ethical conundrums it occasions.

It is, however, best viewed with an awareness of its extensive alterations.

This publication was made possible partly by a grant from the Carnegie Corporation of New York. The statements made and views expressed are solely the responsibility of the author.