Chiefs, DCEs, others to be blamed for worsening galamsey in Ghana – Abu Jinapor 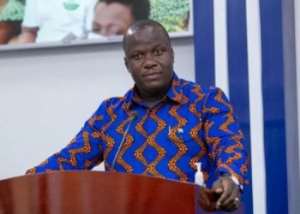 According to him, irrespective of enforcement efforts by the government, the galamsey situation will not improve if people in mining communities do not help authorities in addressing the menace.

Government appears to be struggling to address the issue of illegal mining in Ghana, as many people continue to get involved in it. Vast lands have been destroyed, and water bodies have not been spared.

The activities of these illegal miners are very visible in various mining communities, as the level of devastation speaks volumes.

In an area such as Manso Datano in the Amansie South District of the Ashanti region, hectares of land have been destroyed. This is common in many mining communities in the Ashanti Region and other mining areas.

Citing the Manso Datano case as an example, Samuel Abdulai Jinapor said it is curiously obvious that various stakeholders such as chiefs, and district and regional authorities among others have been aiding the activities.

“I come from a palace and I can say without a shred of equivocation that in most cases, no one, and I repeat, no one can bring a chain saw to harvest in the forest or an excavator to mine in the bush or chanfang to work on a river body in a community without the knowledge, acquiescence or passive approval somehow of the Chief, Elders, the assemblymen, opinion leaders and or local authorities in the community. We have to begin to be blunt about this situation on our hands. It is the honest truth and, sadly for me, I am having to say it and do so publicly. Ladies and gentlemen, you may have heard that on Thursday 29th September 2022 on behalf of the president of the republic, I paid a working visit to our men and women in uniform–the operation halt two team in Manso Datano in the Amansie South District.”

”I was shocked by what I saw. Almost a whole community has been created in the heart of the forest with poultry and goat rearing, beds, a kitchen, and bathrooms among others. The devastation must have been occasioned by years, if not decades of destruction. The question I ask is, how could this have happened on the blind side of the Chief, elders, assemblymen, unit committee members, district police commander, district chief executive, district officers of the minerals commission, forestry commission, environmental protection agency and the members of the community? I do not seem to tarnish the reputation of any person or institution, but I dare say that even regional authorities may not be able to escape from this particular situation and feign ignorance of it”.

The minister is thus calling for all to be involved in addressing the matter, devoid of partisanship.

The Minister for Lands and Natural Resources made these statements at the Kwame Nkrumah University of Science and Technology (KNUST) at its faculty of renewable natural resources 40th Anniversary celebration.

The Asantehene’s representative at the event, Asakyirihene, Nana Mensah Bonsu used the occasion to urge students and faculty members at the faculty of renewable natural resources to research into finding the best ways of addressing the illegal mining issue.