Deforestation, Poverty among Women in the Nanumba North Municipality 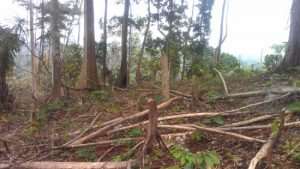 Scientists from all across the world have concluded that the catastrophic effects of climate change are no longer a remote possibility. Climate change and its consequences have arrived. The phenomenon of climate change has various degrees of impact on both rich and poor countries as it does to women and men globally. This article focuses on how human-induced climate change impacts the income generation sources of women in Nanumba North Municipality.

Deforestation has become a regular occurrence among rural residents. The destruction of shea parklands, which has devastating economic consequences for women, is a particular source of worry regarding deforestation in the municipality. Women in the shea nut collection industry are the least to blame for the shea trees’ decline. Nonetheless, they are usually the ones that endure the brunt of the consequences.

These women are economically disadvantaged as they rely on the land and shea trees for their livelihood, therefore a decline in the number of shea trees could reduce their revenue levels. Moreover, shea nut pickers have no savings or insurance. In practice, the majority of them are struggling to provide for their families and they have no safety nets as well. Perhaps the only collateral they might have is the small amount of shea nut stock they have from the seasonal harvest. This scenario significantly impacts the well-being of mothers and their children. Children, especially young girls who have to miss school to undertake menial labour to supplement their families' meager income.

Aside from monetary benefits, shea trees give cooking oil to households via the shea nut. This relieves low-income women of the burden of purchasing cooking oil with their meagre earnings. Shea trees also provide skin moisturiser, hair conditioner, medication, raw fruits, and soap. Environmentally, shea trees play a huge role in climate change adaptation and as carbon sinks. Therefore, without immediate intervention, the destruction of shea trees will increase the impact of climate change and also push the women who rely on shea trees deeper into poverty.

The Nanumba North Municipality's shea tree depletion is blamed on bushfires, storms, and indiscriminate felling of shea trees for charcoal and other purposes. Unfortunately, there appears to be minimal interest in bushfire prevention in the country. The goal of the (PNDC Law 46) passed in 1983 was to make it illegal to start fires except for agricultural, forestry, and game management purposes.

Section (2) of PNDC Law 229 (Act 1990), which deals with the Control and Prevention of Bushfires, states that “a person starts a bushfire if an action of that person results in the uncontrolled burning of any farm, forest or grassland. The Act further states that a person who contravenes or fails to comply with any provision of this Act (Act 229) commits an offence and is liable on conviction to a fine of not less than two hundred and fifty penalty units and not more than one thousand penalty units or to a term of imprisonment or community labour not exceeding 12 months or to both the fine and the imprisonment or community labour and for a subsequent offence to a term of imprisonment or community labour not exceeding two years. However, there has not been concrete efforts on the part of duty-bearers to operationalize this law hence bushfires seem like a legal act.

According to the Ghana News Agency, "a total of 249,373 hectares of forest reserves and plantations, equivalent to more than 600,000 typical football pitches, were lost to bushfires between 2011 and 2021." This will undoubtedly have a negative impact on shea trees.

The need for farmland and charcoal trade have been highlighted as responsible for the indiscriminate cutting of trees in rural communities. Farmers continue to expand their agriculture holdings, while others cut down forests for charcoal production. All of these have a negative impact on tree cover, especially shea trees. According to Global Forest Watch, Ghana lost 1.41 million hectares of tree cover between 2001 and 2021, a 20 percent decline in its tree cover since 2000.

According to some, shea trees take roughly 30 years to mature since they develop slowly from seed. This means that when a shea tree is taken down, it takes more than two decades for another to grow. This necessitates immediate action to protect the trees and the livelihoods of rural women in the Nanumba North Municipality.

According to the Ghana National Climate Change Adaptation Strategies (NCCAS), one essential strategy for avoiding deforestation is to raise local knowledge. People are empowered to act positively when they are provided accurate knowledge about the hazards of chopping down trees, particularly the shea tree. A deliberate communication strategy must be implemented to change habits at the community level. This will have far-reaching consequences in the campaign to protect the livelihoods of women and shea trees.

There is also a need to consider alternate income generation programs for shea pickers and farmers in general. Programs that assure a sustainable livelihood will help keep trees from being cut down for money. More importantly, climate justice must be incorporated into all initiatives and policies.

You’ve been a dependable husband – Lordina celebrates Mahama...
45 minutes ago