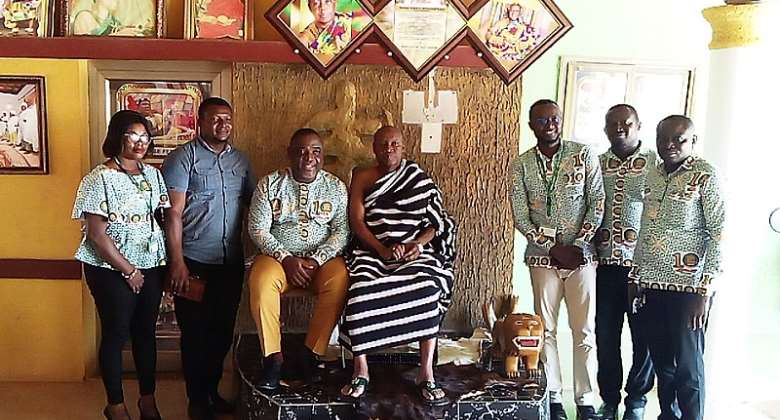 The Sunyani zonal office of the National Pensions Regulatory Authority (NPRA) has indicated its readiness to collaborate with Nana Kwasi Bosomprah, Paramount Chief of the Goaso Traditional Area on his 'one trader, one SSNIT number' campaign.

The idea of the Paramount Chief is to encourage every trader have a Social Security and National Insurance Trust (SSNIT) number and contributed to the scheme.

The collaboration became a reality when Mr David Tetteh-Amey Abbey, the Deputy Chief Executive Officer of the NPRA and staff of the Sunyani zonal office visited the Omanhene at his palace as part of activities to round up a stakeholder engagement in Goaso.

Nana Bosomprah said he already started the campaign to ensure every trader in his traditional area registered and contributed to SSNIT for a comfortable retirement.

He indicated ''as a trader there will be a time, you will not have the strength to trade and therefore it is essential to start a retirement plan which will sustain your future when you can no longer work".

Nana Bosomprah added that most traders had the perception that "it is only public sector workers who should contribute to SSNIT or have a pension scheme. That is wrong because the new pension reforms captured both formal and informal workers".

Nana Bosomprah indicated he would use his position to educate people about pension and retirement plans.

Mr William Ohene-Adjei, the Sunyani Zonal Manager thanked the Goaso Omanhene for his effort and indicated his outfit's commitment to joining the campaign to educate and reach out to more people especially those in the informal sector.

Police investigate drowning of officer at Sefwi Amoaya
9 minutes ago