UN report warns of crimes against humanity in Ethiopia 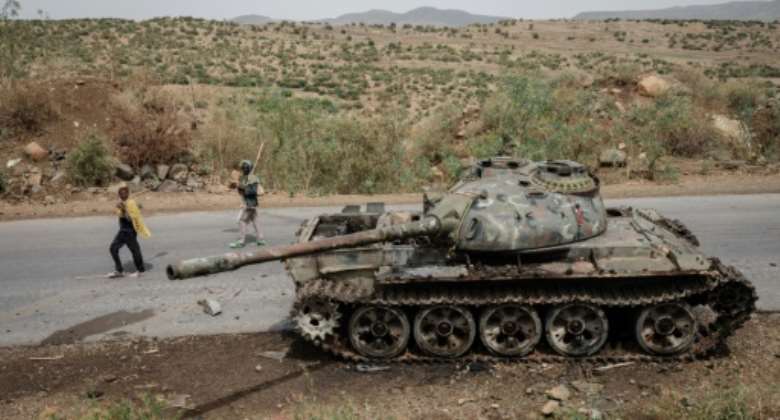 Severe restrictions on humanitarian access have left 90 percent of the region's population in dire need of assistance. By Yasuyoshi CHIBA (AFP/File)

UN investigators said Monday they believed Ethiopia's government was behind ongoing crimes against humanity in Tigray, and warned the resumption of the conflict there increased the risk of "further atrocity crimes".

In its first report, the Commission of Human Rights Experts on Ethiopia said it had found evidence of widespread violations by all sides since fighting erupted in the northern Tigray region in November 2020.

The commission, created by the UN Human Rights Council last December and made up of three independent rights experts, said it had "reasonable grounds to believe that, in several instances, these violations amount to war crimes and crimes against humanity".

The experts listed a long line of horrific violations, from extrajudicial killings to intentional starvation and rape and sexual violence perpetrated on a "staggering scale".

And they highlighted in particular the situation in Tigray, where the government and its allies have denied around six million people access to basic services, including the internet and banking, for more than a year.

Severe restrictions on humanitarian access have left 90 percent of the region's population in dire need of assistance.

The report said there were "reasonable grounds to believe that the Federal Government and allied regional State governments have committed and continue to commit the crimes against humanity of persecution on ethnic grounds and other inhumane acts".

They were "intentionally causing great suffering or serious injury to body or to mental or physical health based on their ongoing denial and obstruction of humanitarian assistance to Tigray", the report said.

In a statement, commission chair Kaari Betty Murungi described the humanitarian crisis in Tigray as "shocking, both in terms of scale and duration".

"The widespread denial and obstruction of access to basic services, food, healthcare, and humanitarian assistance is having a devastating impact on the civilian population," she said.

She condemned likely crimes against humanity and warned that the government appeared to be "using starvation as a method of warfare".

She also urged Tigrayan forces to "ensure that humanitarian agencies are able to operate without impediment".

Since war broke out in November 2020, thousands have died, and many more have been forced to flee their homes as the conflict expanded from Tigray to the neighbouring regions of Amhara and Afar.

A truce in March had raised hopes for a peaceful resolution of the war, but those were dashed when combat resumed last month.

"With a resumption of hostilities in northern Ethiopia, there is a very real risk of further civilian suffering and further atrocity crimes," Murungi warned.

Even before the fighting resumed, the experts said they had found evidence that rape and sexual violence had been perpetrated on a "staggering scale" since the conflict erupted, especially targeting Tigrayan women and girls.

An earlier joint investigation by the UN rights office and Ethiopia's Human Rights Commission determined that possible war crimes and crimes against humanity had been committed by all sides.

Tigrayan authorities welcomed the report, with a spokesman telling AFP they had "always maintained" that Ethiopia's government was responsible for crimes against humanity in the region.

The experts voiced alarm at their findings, which they said "reflect profound polarisation and hatred along ethnic lines in Ethiopia".

"This has created a disturbing cycle of extreme violence and retribution, which raises the imminent threat of further and more pronounced atrocity crimes," their report warned.

The report, due to be presented to the rights council on September 22, made a number of recommendations, including that all parties to the conflict "immediately cease hostilities and violations... including those that might amount to war crimes or crimes against humanity".

It calls on the UN rights office to ensure "full monitoring" of the situation in Ethiopia, and urges the Ethiopian government, its Eritrean ally and authorities in Tigray to investigate and bring all perpetrators of abuses to justice.