They're blaming me for defending Aisha Huang; give me an appointment to feed my family if I should quit — Lawyer 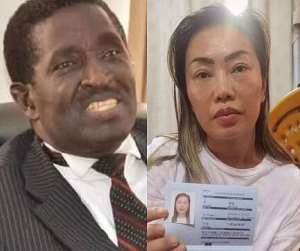 Captain Retired Nkrabeah Effah-Dartey, the lead counsel for Aisha Huang, the embattled Chinese galamsey kingpin has mounted resistance against some persons in government.

He said nobody can force him to stop defending his client.

The lawyer, who is a member of the ruling New Patriotic Party (NPP) noted that he will only stop if he is appointed by Akufo-Addo's government.

The experienced lawyer explained to Kumasi-based Oyerepa FM's "Ghana Tesen" show that he is working for the Chinese national as a lawyer rendering a service paid for.

He revealed that on the two occasions he has defended the galamsey kingpin, he has always been paid on time and in full.

"If government gives me an appointment to stop defending Aisha Huang, of course, I will stop,” his response to whether an appointment can change his decision.

He adds “people who are blaming me for defending Aisha Huang don't know what they are saying. I have a wife, children and grandchildren, so I'm only working for my daily bread."

Repatriated in 2018, Aisha Huang has been in police custody for nearly three weeks after being apprehended in her hideout by National Security.

She has since made two court appearances for charges of illegal mining and the sale and purchase of minerals without a license.

Burundi's Gatumba massacre offers a window into the past and...
18 minutes ago