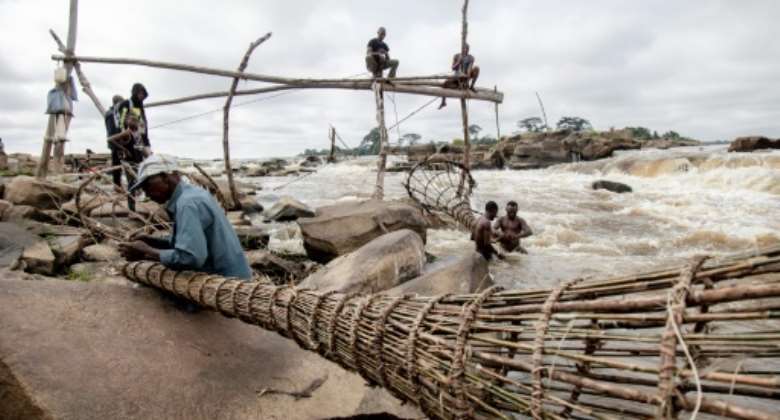 Fishermen perch precariously on wooden scaffolds stretching over turbulent rapids in northeastern Democratic Republic Congo, hauling up wicker baskets in the hope of catching tilapia or a Nile perch -- a time-honoured practice now threatened by overfishing.

Basket fishing was once the lifeblood of the Wagenya community, feeding them handsomely on a section of the mighty Congo River close to Kisangani, a city in Tshopo province.

But fish numbers have dwindled in recent years, and the fishermen see little help from the government.

Souvenirs portraying traditional Wagenya life are on sale for the few tourists who visit the impoverished DR Congo area. By Guerchom Ndebo (AFP)

Many people, like 16-year-old student Kalimo, get by selling handcrafted dioramas of traditional Wagenya life to the few tourists who visit the impoverished area.

"It helps me to pay for school," said the teenager, who was selling wooden models of small stick men holding large fish, for $10.

Kalimo, whose father is a fisherman, wants to become an engineer.

On top of the problems with fish, the Wagenya -- split between three main clans and five sub-clans -- are bickering among themselves.

The position of traditional chief, who serves as an intermediary between the community and the government, is unfilled because of factional infighting.

Augustin Tangausi, who described himself as a "fisherman and servant of God," said this means problems are piling up.

"Everyone does as he likes and we have no-one to defend our rights".

Tangausi pointed to what he calls the "small fishery" by the rapids, which are known as the Wagenya Falls.

Wooden poles are wedged into holes in the rocks and tied together with lianas to form scaffolds.

Baskets are then dropped from the scaffolding into the roaring currents to trap fish.

"There were installations everywhere before," says Tangausi. "But now there are hardly any".

Wooden poles are wedged into holes in the rocks and tied together with lianas to form scaffolds. Baskets are then dropped from the scaffolding into the roaring currents to trap fish . By Guerchom Ndebo (AFP)

The government once subsidised maintenance of the elaborate scaffolds, he said, but stopped doing so over a decade ago.

"Our ancestors handed on this occupation. We have to do it, but it's really difficult," he said.

Fish stocks have plummeted because mature fish are being caught during the spawning season and poor people scour the waters with mosquito nets to scoop up juvenile fish, Aluka said.

"We live off visitors, off the little they give us," he said, sitting on a plastic chair in a straw hut.

Tourists have been few and far between since the Covid-19 pandemic struck, although there is hope that more may begin to come.

The DRC's environment minister visited Wagenya Falls at the beginning of the year and promised investment to attract visitors.

Augustin Tangausi, for his part, was enthusiastic. "We want modern huts, a restaurant, a hotel, shops, offices, a museum, an aquarium, and a cold room too, for the fish," he said.

"This is an international tourist site, known worldwide," he added, noting cautiously that the renovation work still needed to be done.

Tshopo Governor Madeleine Nikomba told AFP that a hotel will be built, and that "we will try to modernise the fishery".

Fishing with a traditional net at the Wagenya falls. By Guerchom Ndebo (AFP)

But the scale of the work that needs to be done is momentous. Roads are so poor that they are impassible. Electricity is patchy. And tourist sites related to Congolese history lie in ruins.

Visitors must also brave chaos at the local airport, where crowds jostle to board flights and occasional shortages of jet fuel ground planes.

Much of the DRC, one of the world's poorest countries, has crumbling or non-existent infrastructure due to mismanagement, successive wars and chronic corruption.

Nikomba, the governor of Tshopo province, promised that all the problems will be fixed. The airport will be renovated, she said, as well as tourist sites and the local zoo -- which currently lies empty.