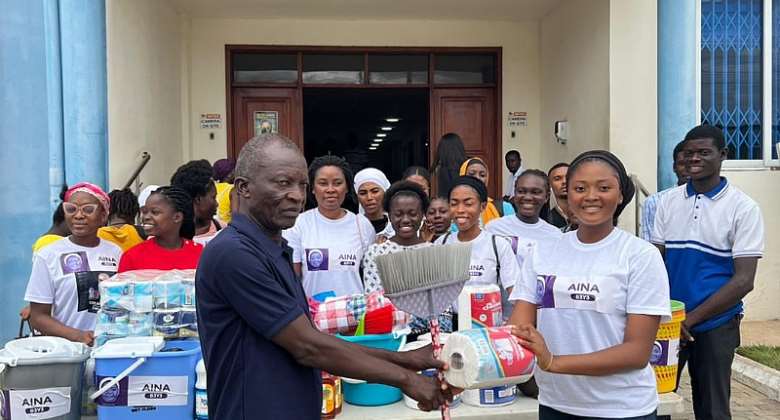 The unsanitary conditions in most washrooms on the Ghana Institute of Journalism (GIJ) campuses is alarming.

The problem, which was posing health risks to the students, particularly the female students, prompted Miss Ayinawu Alhassan to lend a helping hand.

Miss Ayinawu, affectionately known as "Aina," a Women's Commissioner hopeful, organized a health talk series merged with cleanup exercises on the Institute's two campuses to help solve the situation and save students from contracting diseases after visiting the washroom.

The first section of the program and the official liftoff were held at the North Dzorwulu Campus, followed by the second part at the old campus at Ringway Osu.

After the participating students were schooled on the effective ways of keeping themselves and the environment clean, items like toiletries, detergents, and other sanitary items were distributed to the cleaners.

Speaking to Modernghana News on the sidelines of the program, she intimated that "as part of my policies as an incoming Women Commissioner (WOCOM), I consulted some of the students to know their expectations of the office and I realized most of them spoke about unhygienic conditions in the washrooms."

Miss Aina continues “so my team and I, knowing that cleanliness is next to Godliness, designed this program to educate the students on health issues and also help solve the situation. We gave these items to the cleaners to help them clean and maintain hygiene in the washrooms."

The students commended Miss Aina for a good job done and asked for God's guidance for her.

"That is a great step, especially for a student. May God bless her, replace whatever she lost in the process, and bring all her good dreams to reality," a student told Modernghana’s Isaac Donkor Distinguished