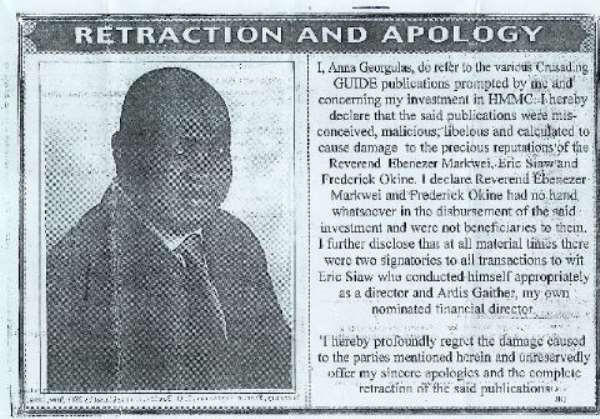 A fundamental axiom of democracy is that citizens must have information and knowledge. People must be informed if they are to play an active role in the life of their country. Free and responsible media are critical sources of information for citizens who want to choose the best leaders for their country and make sound decisions about the issues in their nation and in their individual communities. The presence of a free media also helps to curb corruption and other malpractices in a society.

Achieving a free and responsible media is a constant, challenging, vital, and ongoing activity. We must continue to work at it, adapting to new conditions and challenges. In the pursuit of a free media, one of the main issues faced is that of responsible reporting. Very often in recent times some media houses have been forced to retract stories which were very untrue and clearly not properly researched. The impact of an irresponsible report read by an investor who wont go back to read a retraction later could be very serious. The pain caused to a person by an irresponsible report could also be serious.

With the advent of media like the web, the need has come for media people to even more careful about what they put out. These affect people and these affect our nation. Slowly, the media liberated from the Criminal Libel Law, is growing into a mafia and very dangerous one.

An example of the growing media mafia is a series of reports by one Anas Ameriyaw of the Crusading Guide between 2003 and 2004 on Rev Dr Ebenezer Markwei, Head Pastor of Living Streams Ministries International in Accra. In the series, he sought to portray 'investigative' reporting of a $400,000 gold racket allegedly involving Rev Dr Ebenezer Markwei, Eddie Williams and Frederick Okine in a gold transaction. A source close to Rev Markwei recounts the pain he went through even though he pulled through gracefully. It is particularly difficult in a situation in which only one side of a story is listened to and then taken to print and the ordinary citizen has to go through the pain of public judgement, the process of seeking legal redress for damages caused by the stories. In the case of Rev Dr Markwei, it turned out to be that his alleged involvement was false. The Crusading Guide ran a small retraction by Ana Georgulas (their only source of the story who was an aggrieved party in the business) referring to her actions as libellous, malicious, ill-conceived and calculated to cause damage to the precious reputations of Rev Markwei. Two years on, people still ask him questions about the allegation. Two years on, he has to walk around with copies of the publication and retraction to prove his innocence. It is a sad truth is that when the news get retracted the damage is already done and in often the retraction story is a very small one compared to the big headlines often associated with the 'investigative' report. (See retraction copy here). I wonder if Anas Ameriyaw has had the courtesy to follow up with an apology for the impact the stories may have had on the innocent?

Talal Fattal, the owner of Metro TV and a Ghanaian musician recently had an article written by one Raymond Archer following an allegation by a former member of staff of his company. Not only was the report one-sided and very clearly biased, it carried profanity without any attempt to even mask it. Here again, no attempts were made by the writer to contact Mr Fattal to get his side of the story. Once again, the bad news was heavily published all over the net and by the various print and electronic media in Ghana. His side of the story is not receiving that much attention. To help people who suffer from one-sided reporting, Metro TV has recently started a new program called 'Abused by the Media' to offer the vulnerable and innocent a chance to have their voice heard. Sadly, not every one who read the paper would watch the TV show much as it is a laudable program.

Just about a month ago a leading politician was in the process of suing a paper billions over an article published about him and people were thinking he was being inconsiderate and that it could lead to the publishing house possibly going bankrupt. What people forget is that with the repeal of the criminal libel law in Ghana, ordinary citizens are now more vulnerable and by instituting and implementing damages, the media would have all needed to create a fully functioning mafia in the country. Our nature as a people always in to encourage no litigation is not a helpful thing as far as media freedom is concerned and if we wish to recognise the media's role in developing and sustaining our democracy then we better raise the barriers to help it develop in a safe and confined environment. This has help sustain American media freedom and those of the other developing countries we love to refer to as having a free press.

We are nearing a situation in which hard working, innocent people have to pay to keep an 'investigated' report from being published just like the mafia demand payments to keep you walking the streets or keep you in business. This is a scenario we cannot afford as a fledging democracy. Recently two reporters from the Ghanaian Times were arrested by the police in a set up following an attempt to blackmail someone into parting with millions or have them publish a false allegation about him. We need to encourage the media to expose the ills in the society. We need to encourage the ordinary person to seek redress in the courts with significant financial damages, if need be, to keep both the media and society on their toes. DR KOFI ADJEI, Media Consultant, London Views expressed by the author(s) do not necessarily reflect those of GhanaHomePage.